What to see in Gdańsk. 8 places you should visit.

Home » Blog » What to see in Gdańsk. 8 places you should visit.

What to see in Gdańsk. 8 places you should visit.

The real pearl of the Baltic? What to see in Gdańsk.

There are several reasons why Gdańsk is worth visiting.

Have we persuaded you? Let yourself then be taken to the 8 precious places of the Baltic pearl that will make you fall in love with this port city. 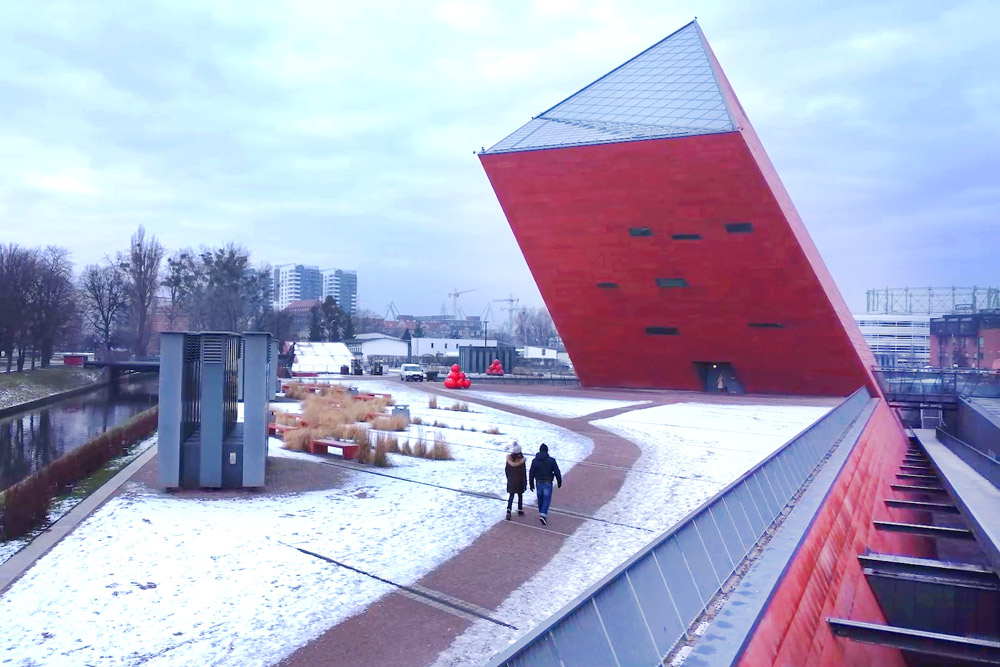 However. All of us were taught in school that World War II began with the Nazi German invasion of Poland. But perhaps some are unaware that the event took place a few kilometres north of the historic centre of Gdańsk. At 4:48 a.m. on September 1, 1939, the guns of the warship Schleswig-Holstein fired grenades over the Westerplatte. It was a Polish military post located at the mouth of the Vistula River. Thus began one of the most violent conflicts in human history.

To describe this museum the right words are missing. You can already imagine! The subject of World War II is very complex and multifaceted. However, it should be noted that from the first moment you will participate in a fascinating historical expedition. During the tour, they will take you chronologically through different events of the contest. The emergence of totalitarianism, military campaigns, strategies, resistance movements or genocide, are just some of the main topics explained in the exhibition. Without revealing more and “spurring” the whole experience – we close it with just one word – Highly recommended!

Unfortunately, the audio guides in Spanish are not available 🙁

You can choose between English, French, German or Russian. The entrance fee is 25 PLN per person. Tuesdays are free.

2) The Basilica of the Virgin Mary 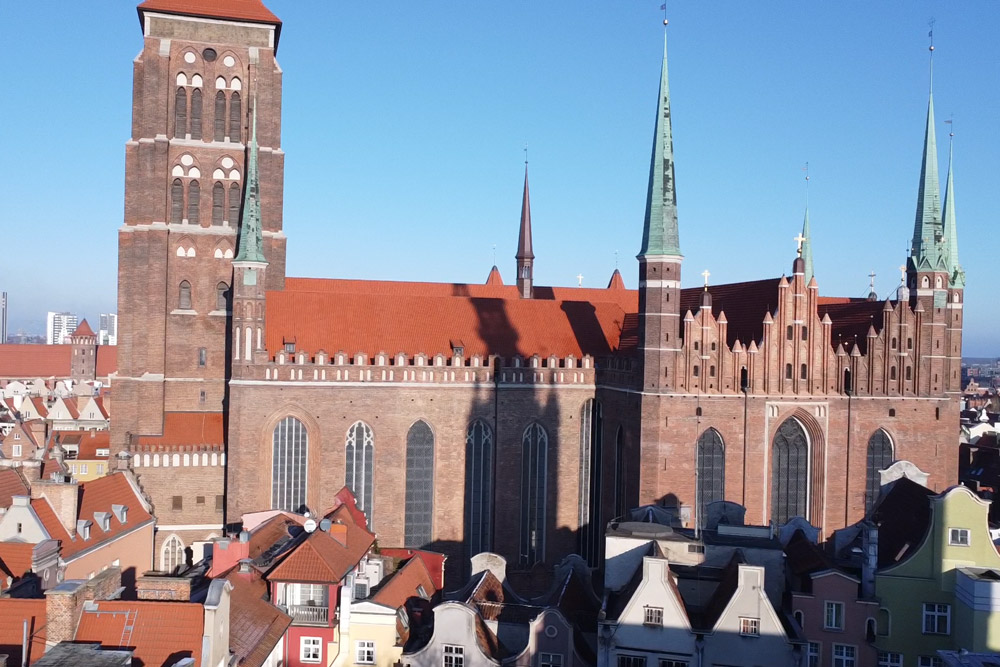 Leaving the affairs of the war behind, you cannot miss the gothic architecture of Gdańsk. This is why the visit to the Basilica of Santa Maria is 100% mandatory.

But it’s not all yet. It has beautiful interiors with spectacular Gothic vaults. Lovers of viewpoints can find an 82-meter bell tower. Going up 150 steps you will get the incredible panoramic views (open only between April – October).

What to pay particular attention to inside the interiors? Definitely in the work of: “Last Judgment” by Hans Memling. The original triptych from the 15th century is in the National Museum in Gdańsk. However, the copy is worth looking at. Jesus Christ sitting on a rainbow. At the bottom, Saint Michael the Archangel draws attention with the scales and the pike. The work is amazing! On the left you can see those who go up to heaven, on the right the damned falling into the infernal flames… 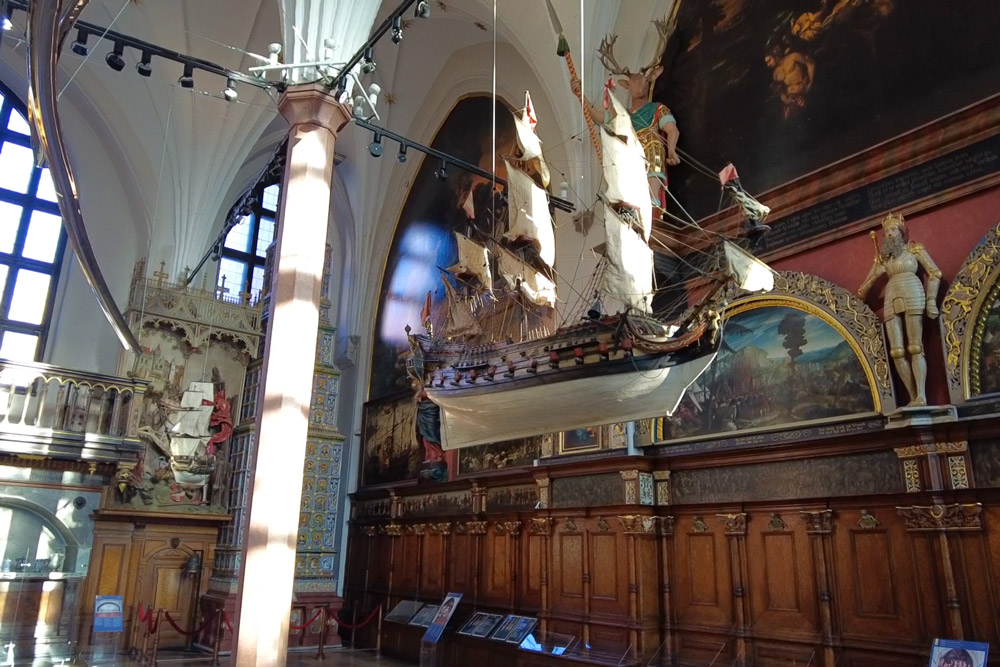 If you are not sure what to see in Gdańsk, you cannot miss these impressive interiors. The Manor House of Artus was built in the 14th century. Initially, it housed the headquarters of the Brotherhood of Saint George made up of the Junkers – the landed German knights.

Have you ever wondered where the name comes from?

The answer is easier than one can imagine. It has to do with the legendary King Arthur and the Knights of the Round Table. It refers to the famous mystical table, which in the Middle Ages was a symbol of equality and brotherhood. Later in the building, the wealthy merchants and masters of craft guilds also met.

The interiors are a true marvel. They are filled with impressive models of sailboats, figures of saints and richly decorated wooden wall coverings! In the corner, you will find a huge 520 tile stove! Although the building was seriously damaged during the war, the reconstruction will make you relive the former glory of the city. Enjoy it!

In the low season on Mondays, admission is free. Tuesday is closed. The other days it costs 16 PLN. 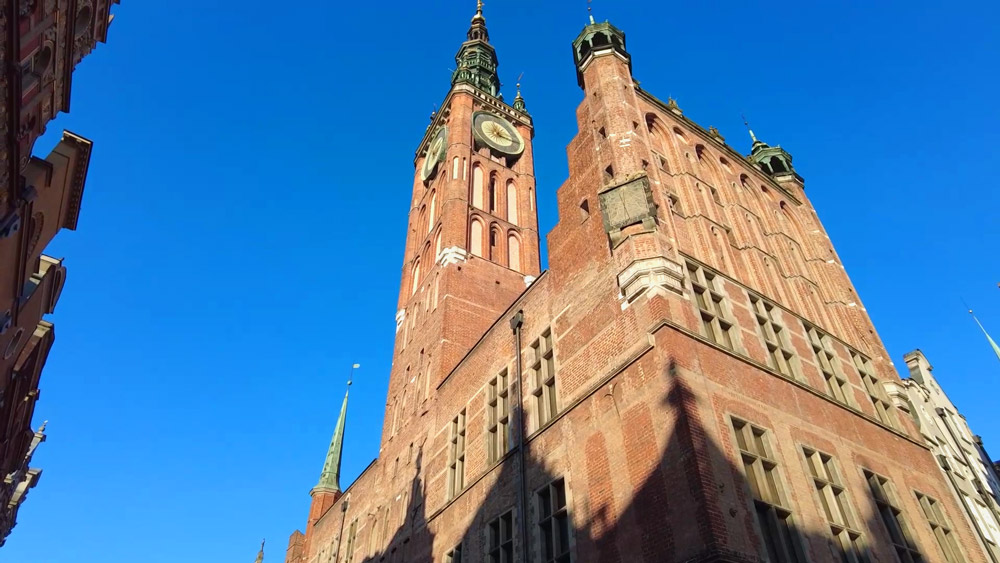 Without leaving the famous Long Market, it is worth visiting the Municipal Town Hall. The building stands out with its majestic tower equipped with a chime of 37 bells. The visit is an experience similar to that of Casa Señorial de Artus. What is the difference then?

In the town hall you will experience more the atmosphere of the municipal administration and the bureaucratic part than that of a celebrity. However, you will be surprised by the decorations of several rooms previously used by the mayor, councillors, corregidores or notaries. You can feel the enormous wealth of this mercantile city at the time of the Polish-Lithuanian Commonwealth. What we found especially interesting was the exhibition dedicated to the period between the wars. Will you wonder why?

The answer is that the creation of the Free City of Danzig and the “Polish Corridor” will immediately make you understand why World War II broke out right in Gdańsk. A very enriching experience.

It is worth scheduling the visit on Monday when it is free. From Wednesday to Sunday it costs 16 PLN. Tuesday is closed. 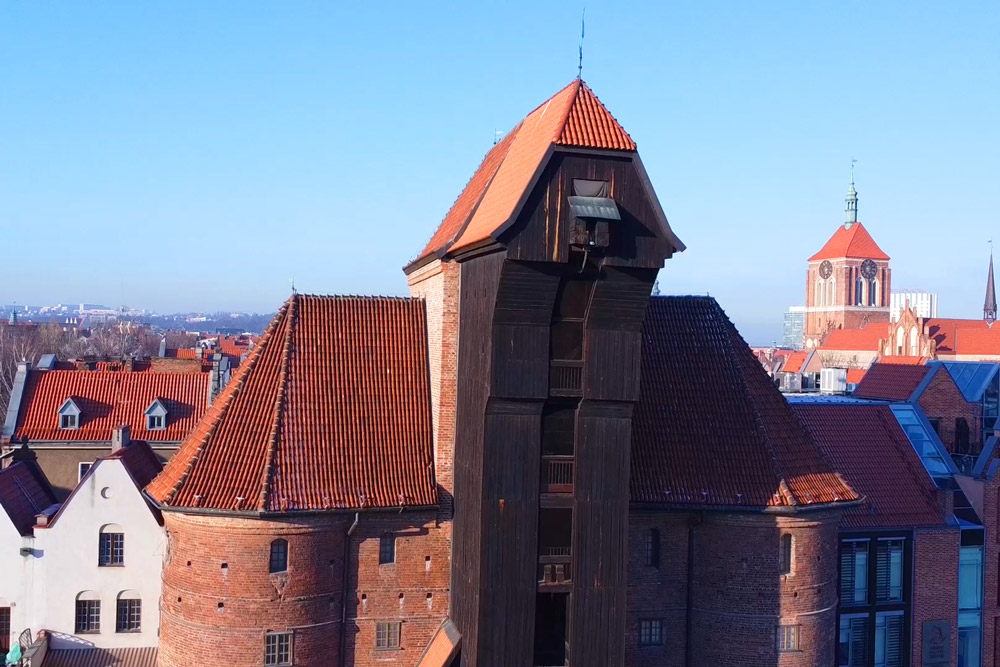 Continuing with our guide to what to see in Gdańsk, we find a world-class monument. An essential point during your visit to Gdańsk. The crane was built in the mid-15th century. It was used to unload barrels or place ships’ masts. A work of medieval engineering art. Thanks to a wooden mechanism it was possible to lift up to 4 tons to a height of 11 meters! And all perpetuated by the force of human muscles. Can you imagine someone pulling or pushing?

There is nothing further from the truth! The force was generated by people walking inside Ferris wheel-like hamsters, an experience to cautiously admire the ropes and wooden wheels imagining the atmosphere of a port city. A luxury monument in front of the dock! 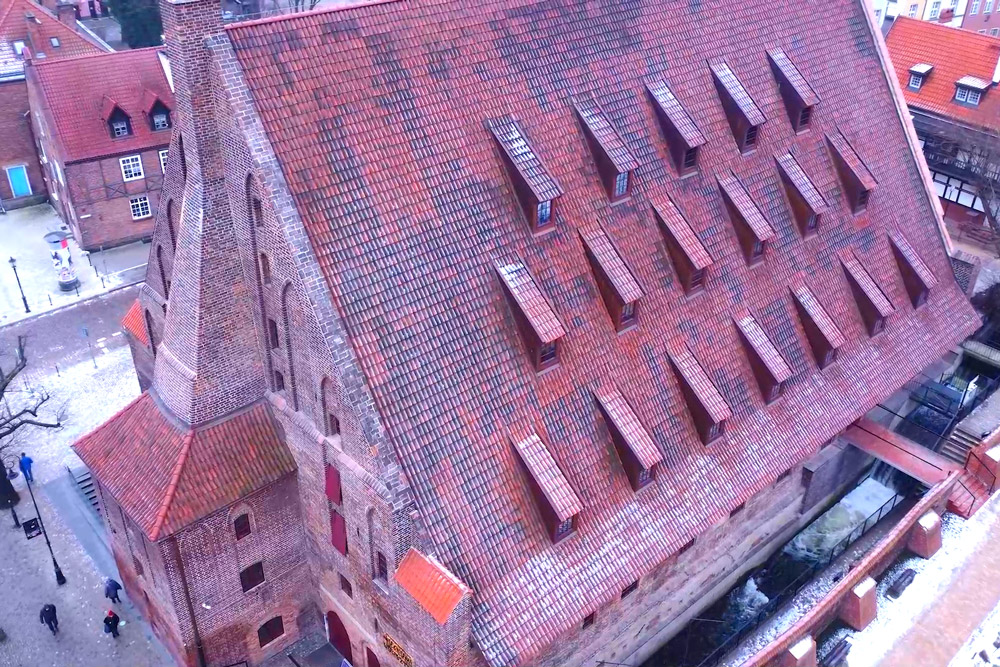 Gdańsk is the world capital of amber. During the walk through the streets of the historic center you will see a lot of shops, galleries and workshops offering amber products in different prices and sizes. Why is this 40 million year old fossil resin such a popular and desired product?

To find an answer to this question, we recommend you visit the Amber Museum. The building that houses the exhibition is extremely attractive. It is a Gothic mill built in 1350 by the Knights of the Teutonic Order. What impressed us in particular was the hydraulic system with respective channels and spillways around the enclosure.

Inside you will find a true universe of amber. More than 1000 pieces! It is one of the largest collections in the world! It consists mostly of donations from collectors and hobbyists. The works of ancient goldsmith masters together with current costume jewelry. It is a thematic museum, but if not in Gdańsk then where can you delve so deeply into the world of this peculiar substance?

7. The Square and the European Center of Solidarity Union 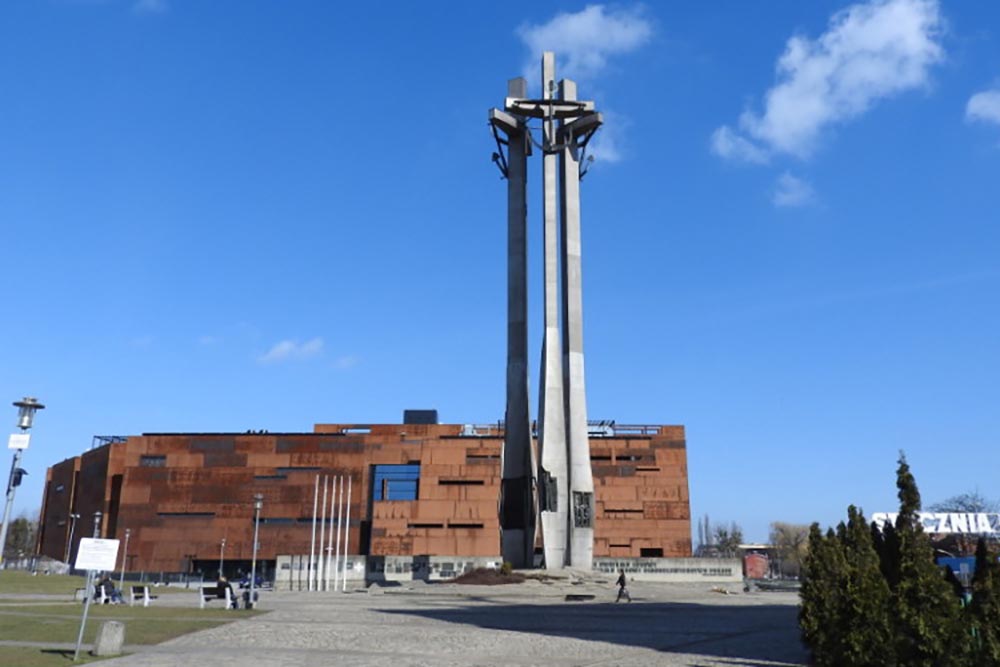 From the point of view of contemporary history this place is definitely worth a visit. During the time of the Polish People’s Republic, shipyards on the Baltic coast were an important part of the national industry. It is there that the famous Solidarity movement headed by its charismatic leader Lech Wałęsa was born. Awarded the Nobel Peace Prize in 1983.

In 2014, an impressive construction was erected on the old shipyard site. The building that imitates a rusty hull of a transatlantic ship houses the European Solidarity Center. It is a crucial point to learn about the history of the union and its impact on the fall of communism in this part of Europe.

The entrance is worth 30 PLN and includes the audio guide in Spanish! Do not miss it!

Also, we recommend you stop at Solidarność square in front of the old shipyard entrance. There are three huge steel crosses 42 meters high. They commemorate the infamous massacre of workers in 1970 at the hands of the army and the communist militia. At the top they are connected with anchors – symbols of hope. A moving and very important site for the people of Gdańsk. 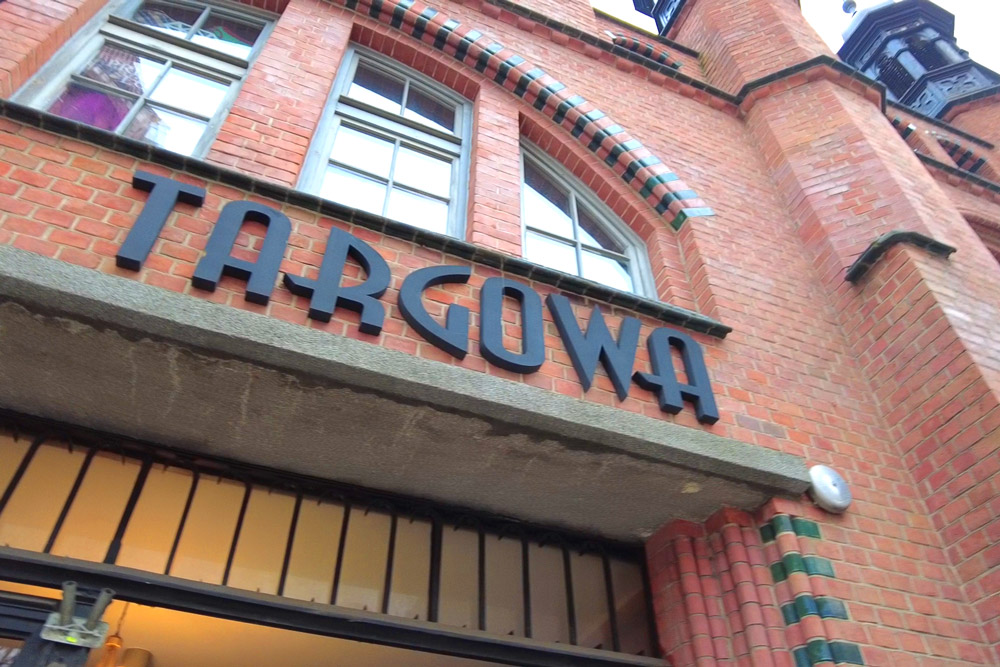 In the latter, we suggest you visit the Covered Market. It is one of those places where the remote past meets today. The building is located in the Plaza de los Dominicos, next to the church of San Nicolás. At the bottom, where the local people buy their food, you can see the archaeological excavations of the old Dominican convent. Then on the ground floor you can buy clothes and tobacco. On the outskirts flowers, vegetables and fruits. A place with a homely atmosphere that offers you to experience something local and recharge your batteries and continue exploring this beautiful city.

Our recommendations on what to see in Gdańsk and its historic center end here. Maybe you dare to tour the city with us during our free tour in Spanish? So, we can take you to one of these places adding explanations, anecdotes or other curious information… You can book here

Obviously, the city has other points of interest. You may also consider visiting the following points: