Home » Blog » 7 places you should not miss in Görlitz

Surely you have heard of the famous American city El Paso on the border with Ciudad Juárez in Mexico. In the same way, we could compare the German city of Görlitz with the Polish city Zgorzelec. While the comparison may seem daring, there are many similarities:

So do you want to know this curious European place? Let us introduce you to our 7 must-see places in Görlitz.

1. The House of Culture – the copy of the Berlin Bundestag 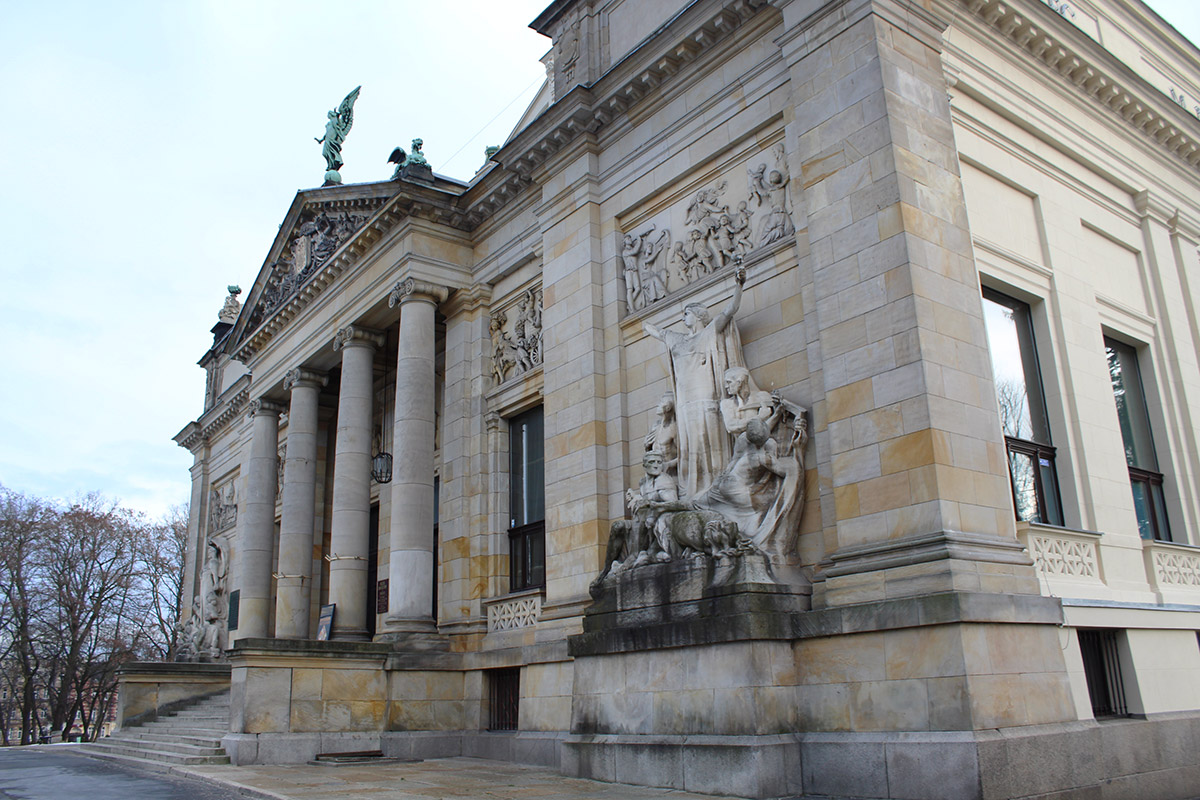 A must-see when visiting Görlitz, even if it is on the Polish side. The building was built to commemorate the first German Emperor Kaiser Wilhelm I and his son Frederick III. Why does it look like the Berlin Reichstag? Because many architects were inspired by this emblematic construction by Paul Wallot that symbolized Germanic unification. And why was it built in Görlitz? Here’s the catch: the city is located in the historic region called Upper Lusatia that was the subject of conflict between Saxony and Prussia. The message was to show that despite regional and local differences, we are all Germans from the newly created empire. This was the past, but what is the current meaning? Even more important. 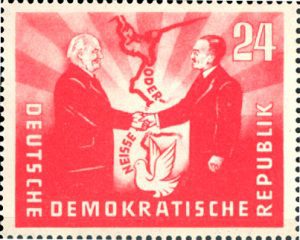 In 1950, in this building, the governments of the GDR and communist Poland under pressure from the Soviet Union signed the treaty, which recognized the new border called the Oder-Neisse Line. However, the Polish government a few years later renounced war reparations to East Germany. A very controversial issue that is often “overheated” by the Polish right. But let’s put politics aside! The interiors, the stairwell, works by local artists are worth admiring as we reflect on the consequences of the Treaty of Potsdam and the new European order created by the Allied Powers. 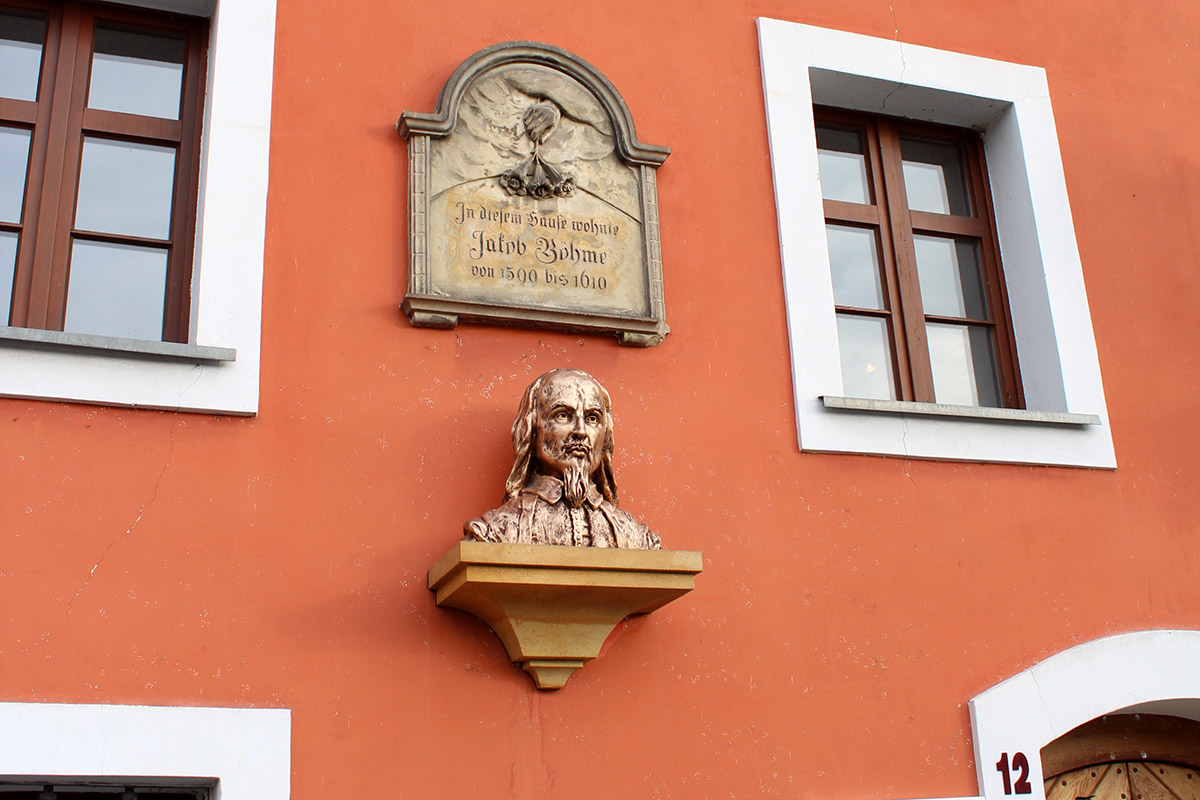 This story is really amazing! Jakob Böhme – a shoemaker, who lived in the humble house next to the Neisse river (still in Poland) experienced two strong mystical visions in the 1600s and 1610s. This caused this simple craftsman to start writing complex philosophical treatises. Your ideas of him? Different from his contemporaries. Böhme dealt a lot with the issue of interpreting the human and the divine using German and not in Latin.

City pastor Gregor Richter prohibited him from publishing and charged him with heresy. But centuries later, various intellectuals were fascinated by his legacy. They called him the Philosophus Teutonicus because he was the first to use the mother tongue. Friedrich Hegel considered Böhme the first German philosopher with his own character. His works were worshipped by the Russian Tsar Alexander I, Isaac Newton, and the Polish poet Adam Mickiewicz. Years later, the most surprising thing is that his works were discovered by Hollywood stars, known to suffer from materialism and artificiality.

In 2006, actor Nicolas Cage visited the city in search of the mystical traces of his favourite philosopher. It seems unreal, right? We recommend visiting Böhme’s house and workshop located in the Polish part of Zgorzelec. Admission is free. On the ground floor there is a tourist information office and on the first floor a reconstructed room, where you can study the life and works of the mystic from Görlitz.

3. Old town – landscape from a tale 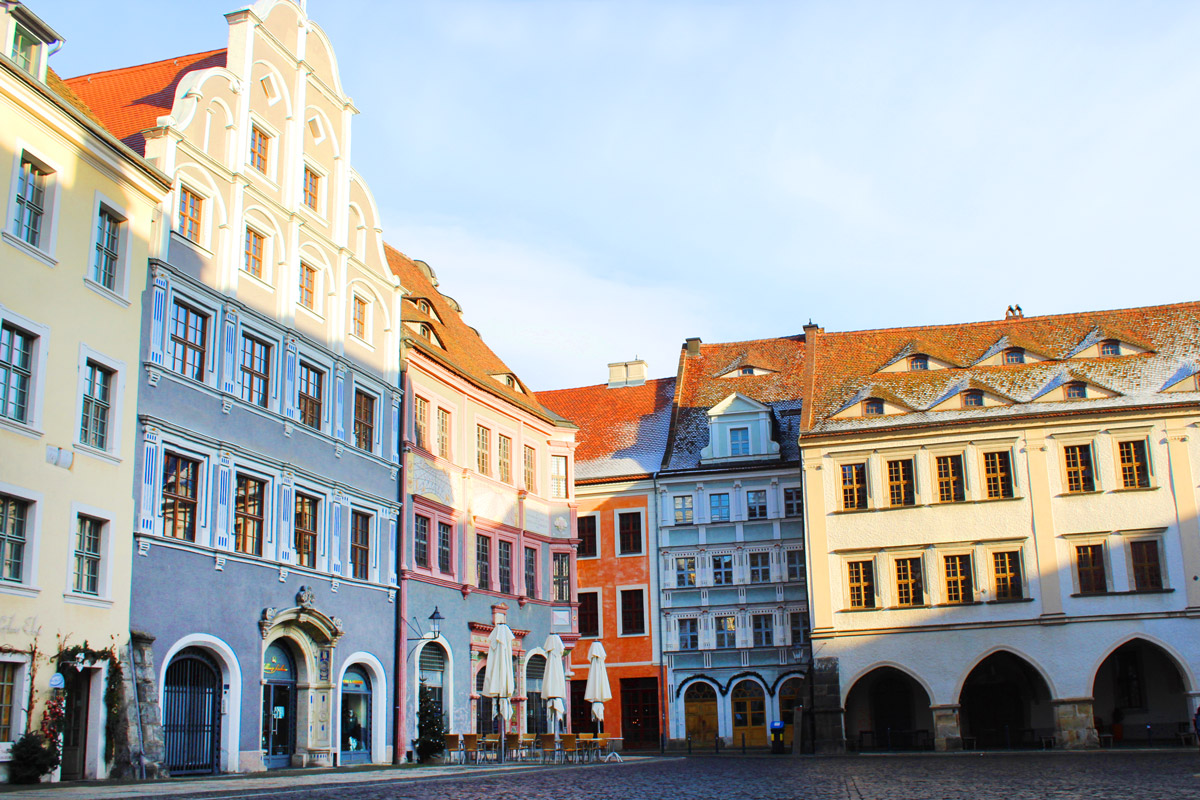 Now is the time to reveal the true beauty of Görlitz! Its old town is one of the best-preserved in Germany. The city was strategically located on the path of merchants and pilgrims called Vía Regia. It formed an important geographical knot between Rus de Kyiv and Santiago de Compostela. When did prosperity begin? In the fourteenth century, in a turbulent time when the phenomenon of the Raubrittern arises. What does this mean in Spanish? They were medieval knights who passed “to the dark side of the force” becoming bandits and thugs, who stopped trade and handicrafts. The cautious burgesses of Görlitz formed an alliance with 5 other cities in Lusatia. They created a Confederation and together they protected the mercantile roads and well-being of the business. The organization survived until the Congress of Vienna in 1815. To this day you can admire the coats of arms of those cities displayed in the New Town Hall of the city.

4. The Old Town Hall – a true gem of architecture 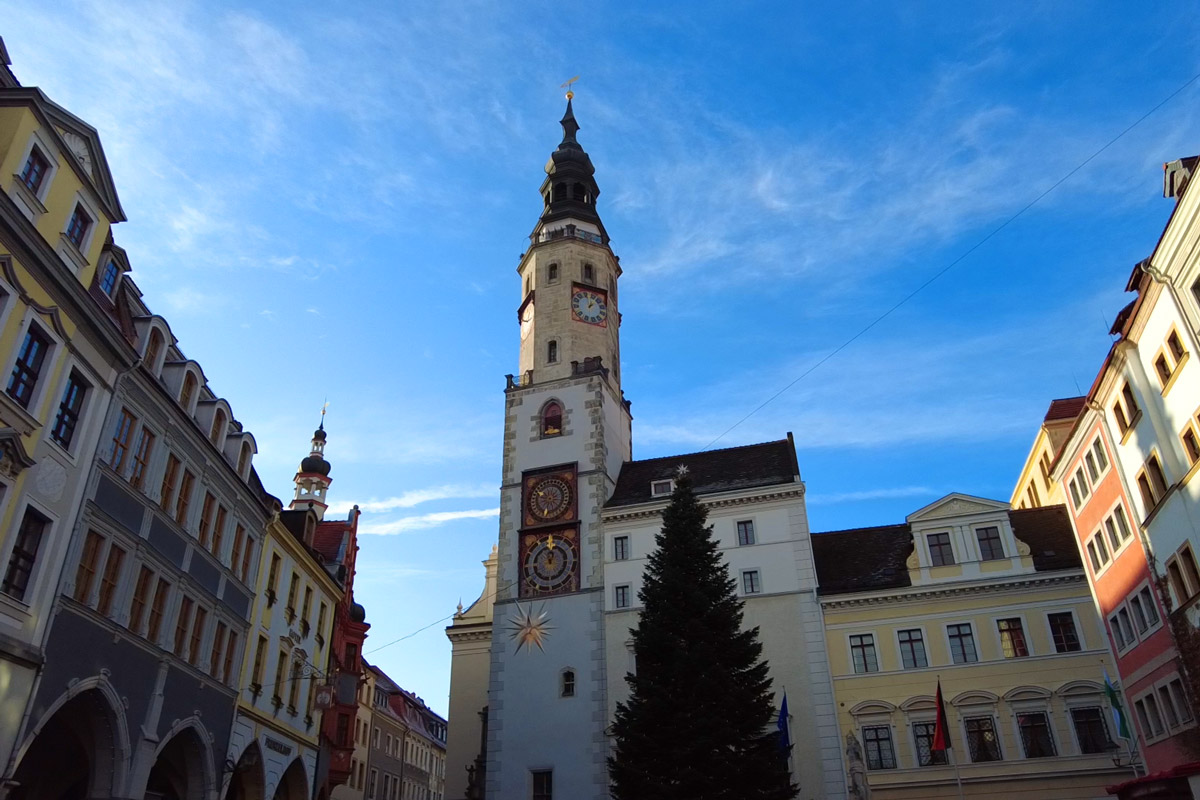 From the balcony with the figure of justice with the scale and sword in the hands, the verdicts were announced. And down the stairs? There the executioner waited, leading the criminals to the gallows. A curious data. The beautiful municipal clock placed in the tower of almost 60 meters has the face of the municipal guard. His job was to observe the homes from the vantage point and warn of the fires. According to legend, the poor official fell asleep without warning of a fire. As punishment, his face was “trapped in the tower”. Every minute he opens his eyes glows orange, symbolizing the flames. And it’s not all yet! Almost at the top, you can see a golden lion. They say that in the Middle Ages he roared at midnight to scare thieves and tramps. How funny 🙂 right?

The square is surrounded by picturesque buildings in the Renaissance and Baroque style. Among them are the Schönhof (The Beautiful Court), which currently houses an opulent collection of the Silesian Museum, the Struve pharmacy with the famous sundial or the scale building. This is where Jackie Chan was flown hanging from a rope in the movie “Around the World in 80 Days.” Because you have to highlight one thing! Görlitz is also nicknamed Görliwood. There the movie scenes “The Reader / A Secret Passion” with Kate Winslet or Inglourious Basterds / Inglorious Basterds by Quentin Tarantino were filmed. The famous secessionist warehouse (Kaufhaus Görlitz) served as the filming location for The Grand Budapest Hotel. But going back to the square. Can you ask and where did the small town on the shores of Germany have the resources to rescue and renew all this neglected heritage in communist times? The answer is more surprising than one can imagine.

It seems incredible, but since 1995 for more than 20 years, a mysterious patron began to donate each year to the municipality of Görlitz more than half a million euros – to be exact 511,116 euros. Under what conditions?

In 2016 the last donation arrived. What were the hypotheses behind this mystery? All the formalities were arranged by a law firm that never revealed the identity of Mr X. Perhaps he was a rich chocolate maker? Perhaps Nicolas Cage was in love with the philosophy of local craftsman Jakob Böhme? Maybe a character with a dark past from World War II who wanted in this way to erase the guilt caused to the innocent victims? It seems that we will never find out the answer and this makes it more exciting and fun to explore the old town of Görlitz.

6. The Church of Saint Peter and Paul 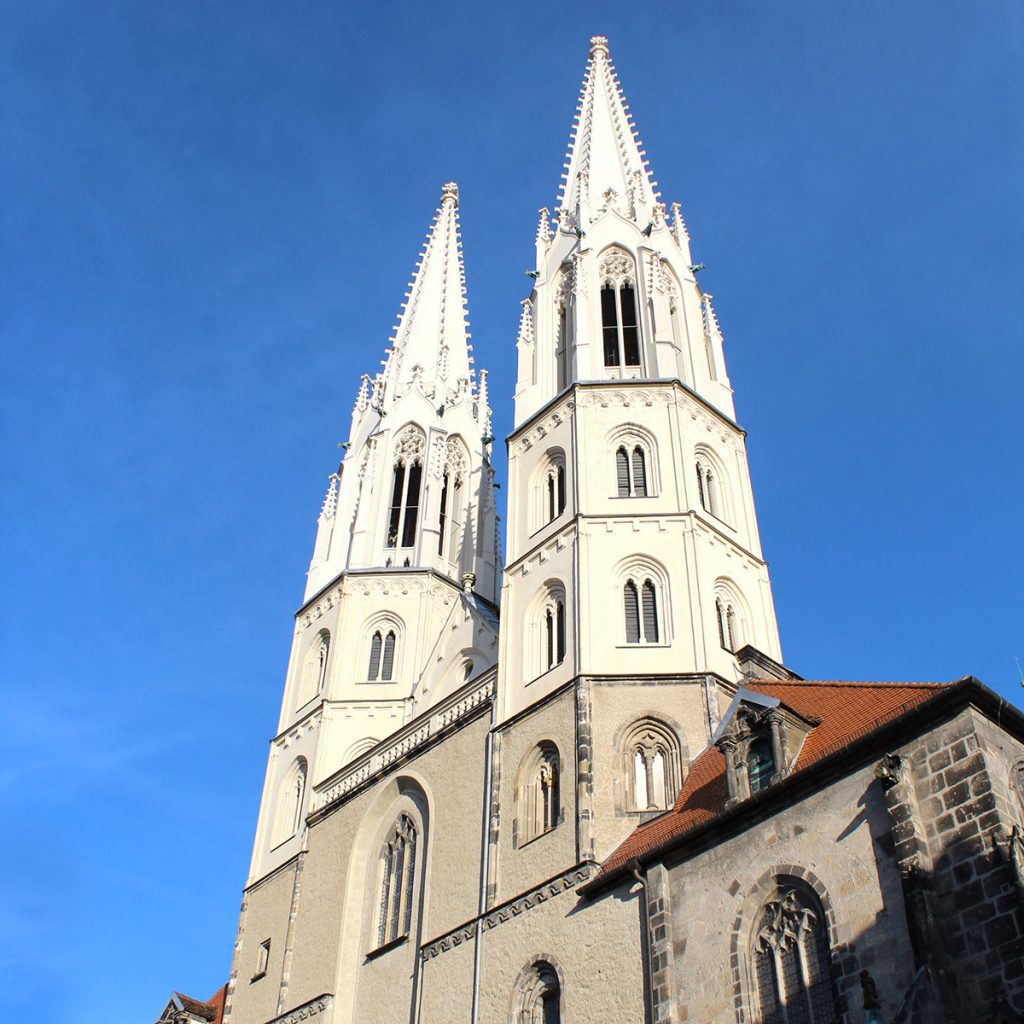 In a city of merchants and artisans like Görlitz, you could not miss an impressive place of worship. The Church of San Pedro y Pablo was built in the 15th century. It has the best examples of Gothic architecture. Lie 🙂 not the whole church. The 84-meter towers were built of reinforced concrete between 1889 – 1891. Their interiors will not stop surprising you with their ribbed vaults and the stone choir. Do you remember Jakob Böhme? Here Pastor Gregor Richter preached criticizing our shoemaker cult. What to pay attention to in particular?

7. German Jersulen – all because of a scandal?

Walking a few minutes outside the old town one will reach a very special place in Görlitz – the copy of the Holy Sepulcher of Jerusalem. Why such an original venue in the city? All through an immoral scandal. Georg Emmerich son of the richest burghers of the city, got pregnant the daughter of the important political opponent of his father! But it is not all! He did not want to marry her, which at this time has caused a common upset. The father decided in 1465 to send his little son on a pilgrimage to the Holy Land. Emmerich received full indulgence for his sins, and returning to Görlitz, filled with new faith and hope, he decided to copy what he went through praying in distant lands. Why is he so unique? Because the Basilica of the Holy Sepulcher has subsequently been remodelled several times.

If you want to know how the place looked in the 15th century, you can only do it by visiting the Görlitz enclosure. The single ticket costs 3 euros, although there is the option of extending it to the Church of San Nicolás, the cemetery. We recommend entering the 2-story chapel of Santa Cruz.

The Chapel of The Holy Cross

Our recommendations end here. Obviously, the city has more monuments, medieval towers, museums and churches. The Synagogue is worth visiting. The most comfortable way to get to Görlitz is by rail. Trains depart from Dresden Central Station (Dresden Hauptbahnhof) almost every hour and cost approximately 25 euros one way. From Wrocław in Poland, it’s a bit more complicated. Direct trains run from Central Station (Wrocław Główny) to Zgorzelec Miasto every two hours. The ticket price may vary, but round trips are approx. 15 euros. We hope you have found this blog useful in planning your trip to Germany or Poland. Görlitz is a city full of interesting places to visit. Enjoy it!