The 5 places you cannot miss in Augsburg

Home » Blog » The 5 places you cannot miss in Augsburg

The 5 places you cannot miss in Augsburg

Have you already seen everything about Munich? Did you walk the medieval streets of Bavarian city? Have you tried the best local beers? Have you taken a free tour in English through the historic centre?

Are you looking for a cheap option to get to know other corners of Bavaria, that will leave you with your mouth open? Let us take you to a beautiful nearby city called Augsburg! Ready? Let’s go! 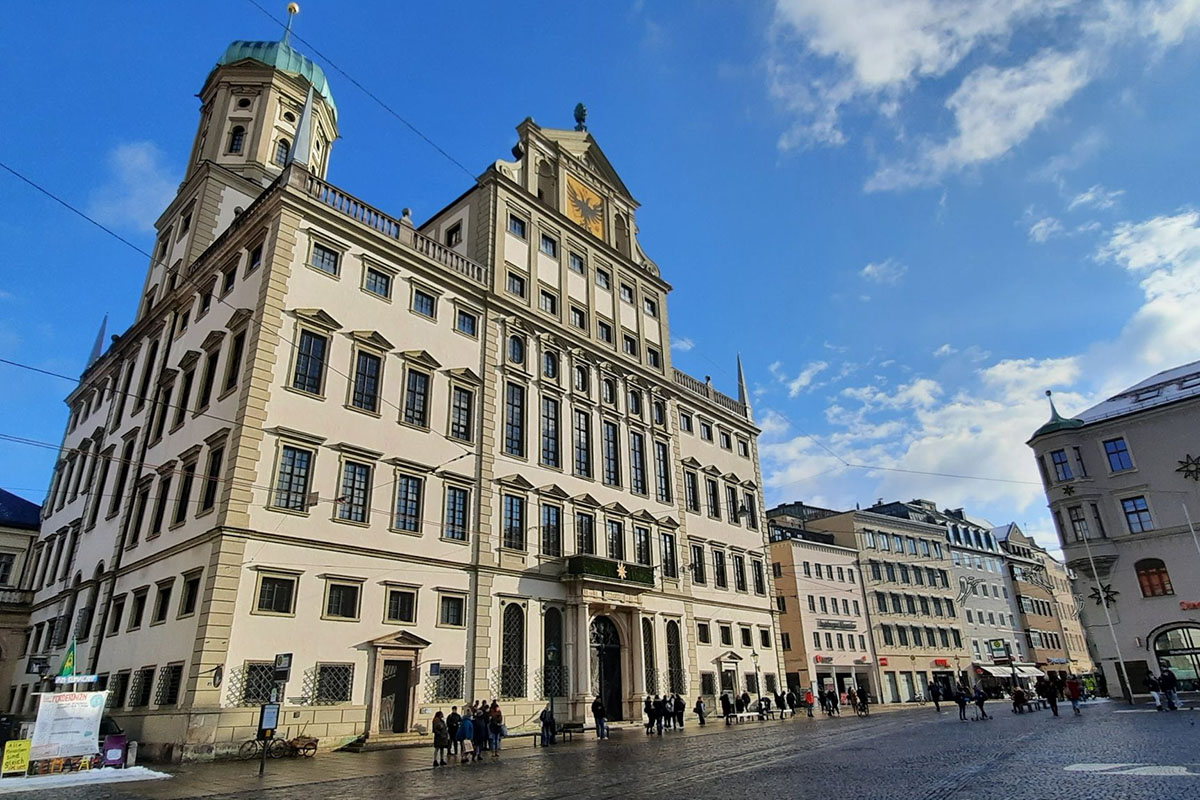 The city with Roman heritage

Augsburg has a much longer past than Munich and belongs to one of the oldest cities in Germany. The place was established during the time of the Roman Empire and the name derives from the emperor Augustus. Today it is the third-largest city in Bavaria, but its historical importance goes far beyond the world level. Do you want to know why? There are at least 2 reasons

1. In Augsburg Martin Luther was questioned about the papal legate after having published his famous 95 theses. It was a turning point in the Protestant Reformation that changed the destiny of Germany and the rest of the globe. But that’s not all yet!

2. The first global financial institutions are also born in Augsburg. It looks awesome? During the reign of Carlos I of Spain and V of Germany, the wealthy families of Welser and Fúcar lived in the city. These powerful bankers financially supported the expansion of the Spanish Empire. They participated economically in the Conquest of America. They created the most powerful business groups in Europe as precursors of modern capitalism.

Did it catch your attention? Here are our recommendations of 5 places you cannot miss in Augsburg.

1. The City Hall building with the Golden Room The building stands out for its size and style, constituting the most characteristic point of the city centre. It is worth going inside and visiting its interiors for a moderate price of 2.5 euros per person. The town hall was built in the years 1615-1625 by an important local architect Elias Holl, whose monument is on the other side of the building. Did we mention the rich bourgeois operating in the city? So you will not be surprised by the splendour of the Dorando Room located on the second floor. It’s amazing! All full of ornaments and precious finishes covered in gold with various allegories of mythological virtues and characters. Who do we pay our special attention to? Obviously to the representation of Carlos V, the creator of the empire in which they said “the sun never sets.” 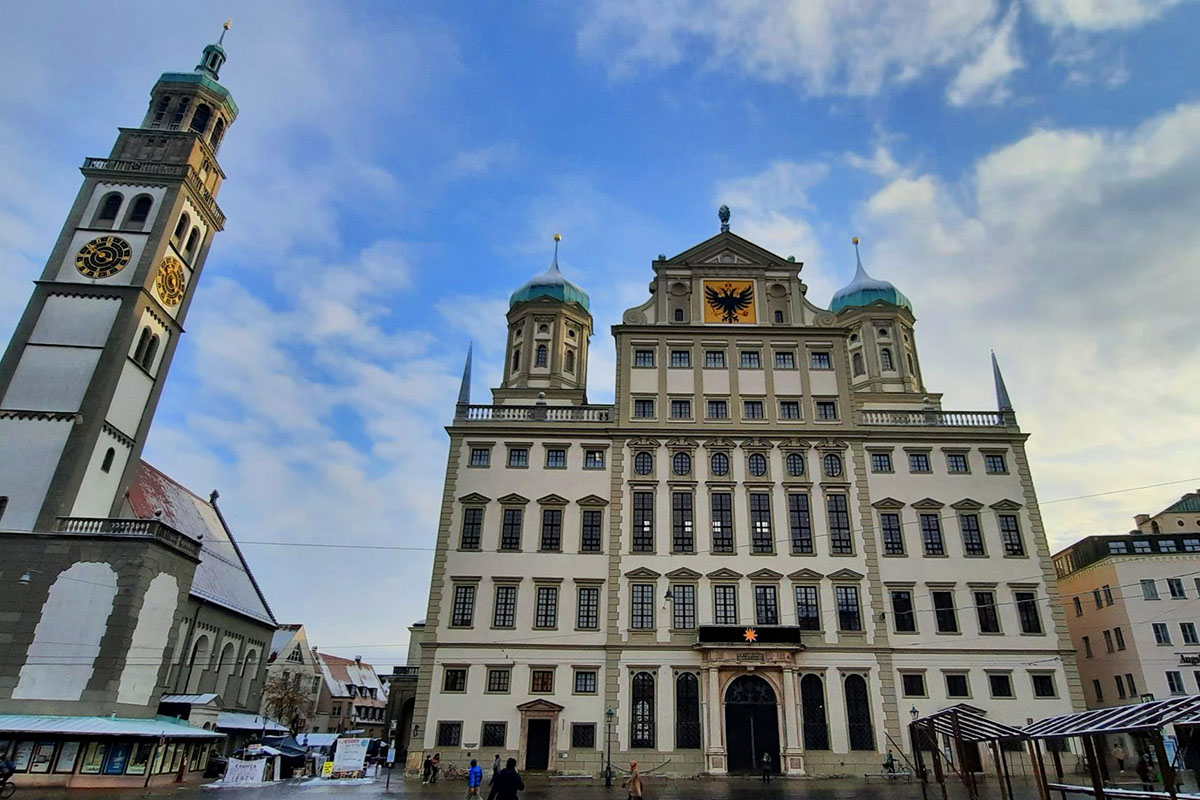 Another icon of the city is the church of San Pedro with its characteristic 70-meter-high bell tower located to the left of the town hall. Who was the architect? As you can guess Elias Holl himself. In the summer time you can go up to the viewpoint to enjoy the beautiful landscapes of the old town. Fun fact, in the 17th century there lived in Augsburg, Salomon Idler, the shoemaker, aviation pioneer and a builder of one of the first paragliders. They say, he wanted to test his new invention by jumping off the top of the Perlach bell tower. He had more luck than success with his machine, as the local priest persuaded him to try a more modest height first. The effect? A collision with a bridge also caused the death of some poor chickens. Admirable personality, who gave the name of one of the streets of the city. 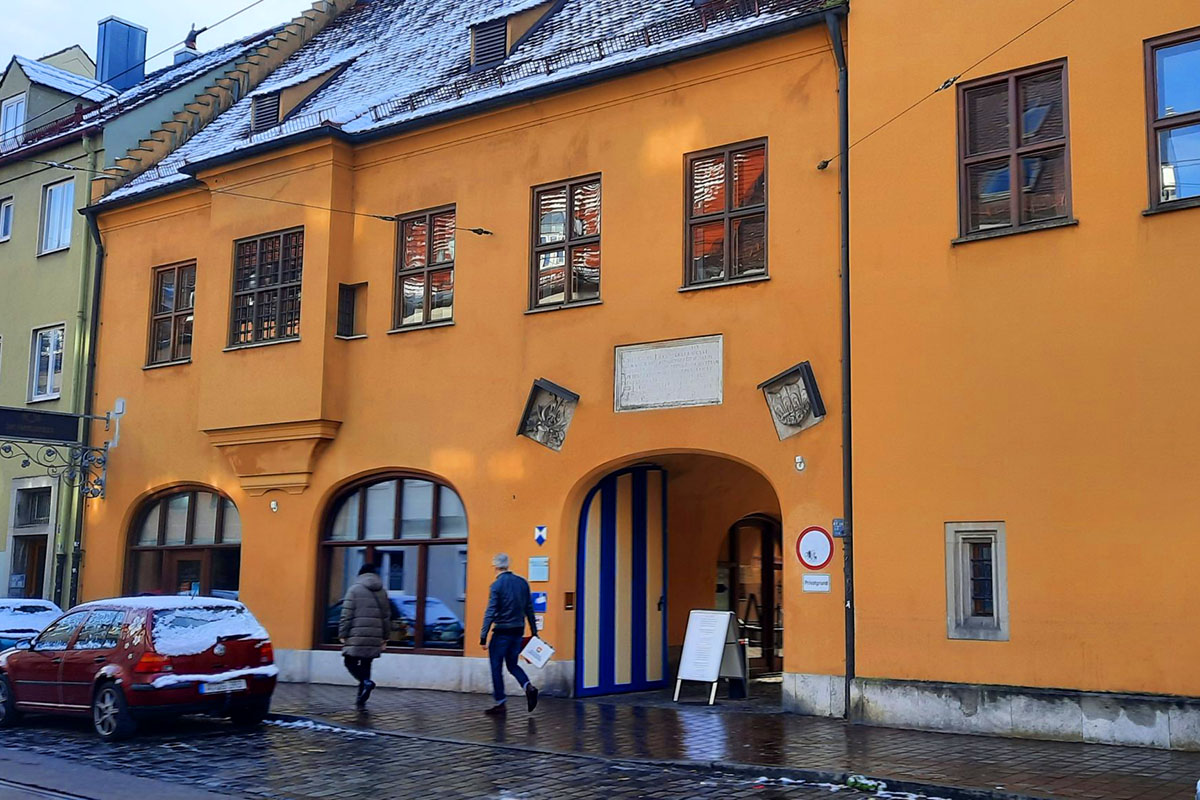 It is a small neighbourhood located a few minutes walk from the historic centre. It confirms not only the wealth of the Fúcar family but also how we would now call it “social responsibility”. The Jacobo Fúcar “El Rico” established a whole walled urban nucleus with its respective church, houses and workshops as a colony for the most economically needy people. Despite the destruction of the war, the place continues to function and approximately 150 people still live there. It seems incredible, right? The enclosure is managed by the Administration of the Fugger Foundation and the residents also pay, as they did 5 centuries ago, the value of one Rhenish gulden per year. And how much is a Rhenish gulden worth today? You’re going to smile 😊 only 0.88 euros !! But it is not all. They are morally obliged to say three prayers a day to the founders of the Fúcar family. Would you dare to live there?

The entrance to the colony costs 6.5 euros per adult. It is a fair price since you can visit various parts of the enclosure with the church of San Marcos, the school or the sacristan’s house to a bunker from the Nazi era! Another curious fact; Franz Mozart, Wolfgang Amadeus’ great-grandfather of composers, lived at number fourteen from the year 1681. 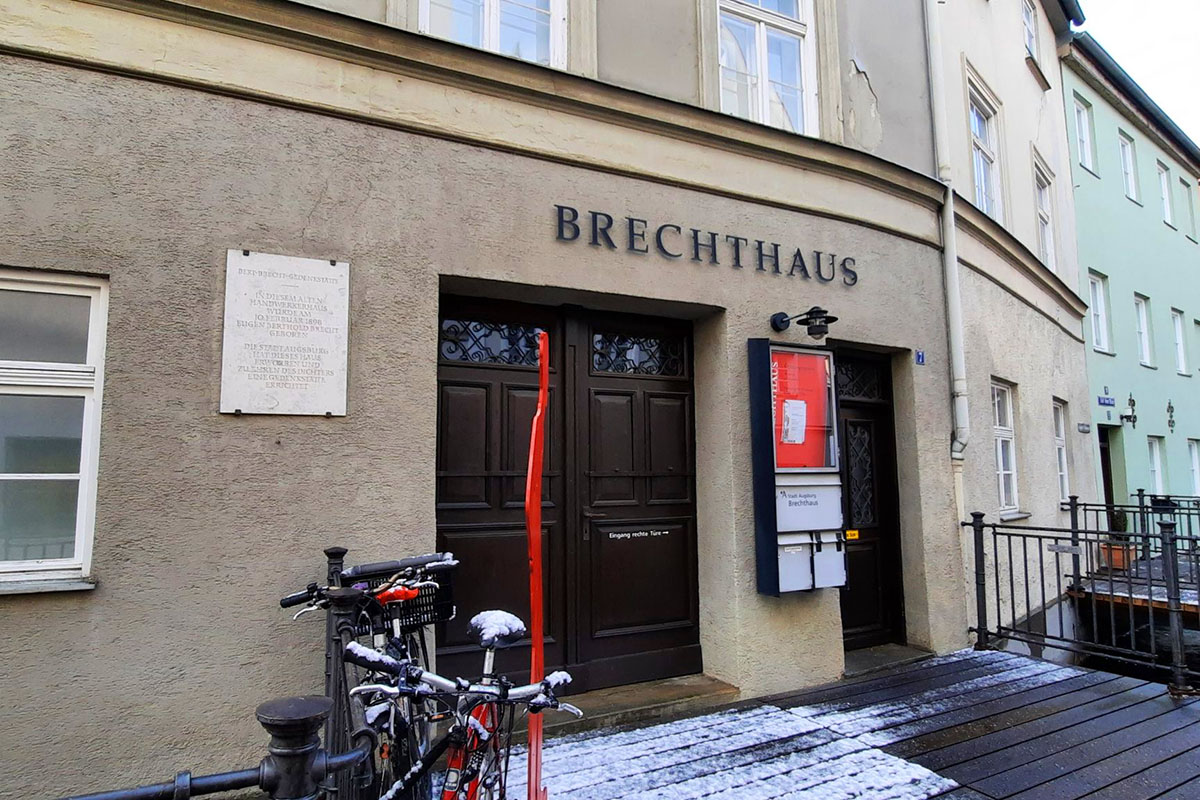 Bertolt Brecht is an iconic character in German culture. Playwright, writer, creator of the dialectical theater, he was born in this small artisan house in 1898. The museum located between the picturesque canals of the river Lech is worth a visit. Openly declared a communist, he was forced to leave Germany during the dictatorship of Adolf Hitler. Many of his works were burned by the paramilitary troops of the Nazi party. What can be found inside? Several rooms dedicated to the life and works of the creator of “The Opera of the Three Cents”. Photos, posters, personal belongings and books, which help to understand the trajectory of the author of “the ballad of Mackie the Razor” (with music by Kurt Weill). An interesting place to contemplate the contemporary history of Germany and its recent political division.

It is one of the essential places during your visit in Augsburg. It is the oldest part of the city that recalls the first Roman settlements. The interiors will offer you a true journey through the centuries passing through different Romanesque and Gothic parts. History is truly on this site! What completely impressed us was a huge fresco depicting Saint Christopher with a long beard and a cane. Next to it is the Diocesan Museum of Santa Afra where you will find the funeral coat of arms of Emperor Charles V. It is also recommended to walk briefly through the park, where you can admire an archaeological park and stone elements of medieval architecture.

Other places of interest

Our recommendations end here. Obviously, the city has other churches, monasteries and medieval towers. It is also worth admiring the numerous sources among which the famous ones are Mercury (very convenient for Augsburg, since he is the Greek god of Commerce) and Hercules (which makes the reference to Charles V defeating heresy). Not to mention the most spectacular one dedicated to Cesar Augusto Octavio in the Market Square. The most comfortable way to get to Augsburg is by rail. Trains depart from Munich Central Station (München Hauptbahnhof) almost every half hour. The ticket price can vary between 12-18 euros. Hopefully, you have found this blog useful in planning your trip to Germany. Augsburg is a city full of interesting places to visit. Enjoy it!