6 Places in Jewish Warsaw you must visit

Home » Blog » 6 Places in Jewish Warsaw you must visit

The legacy of the disappeared culture

Many travelers who decide to visit the Polish capital want to learn about the legacy of the Jewish community. The German occupation and the horrific policy of extermination marks the before and after in the Jewish history of Warsaw. Do you wonder what has survived the destruction of war? What are the most important sites to understand the infamous Holocaust operation?

In this article we are going to introduce you to the 6 places related to Jewish Warsaw. For the most part it’s going to be a bitter experience, uncovering the darkest chapters in human history. Are you ready to delve into this very complicated topic? Let’s get started!

1. Museum of the History of Polish Jews Polin 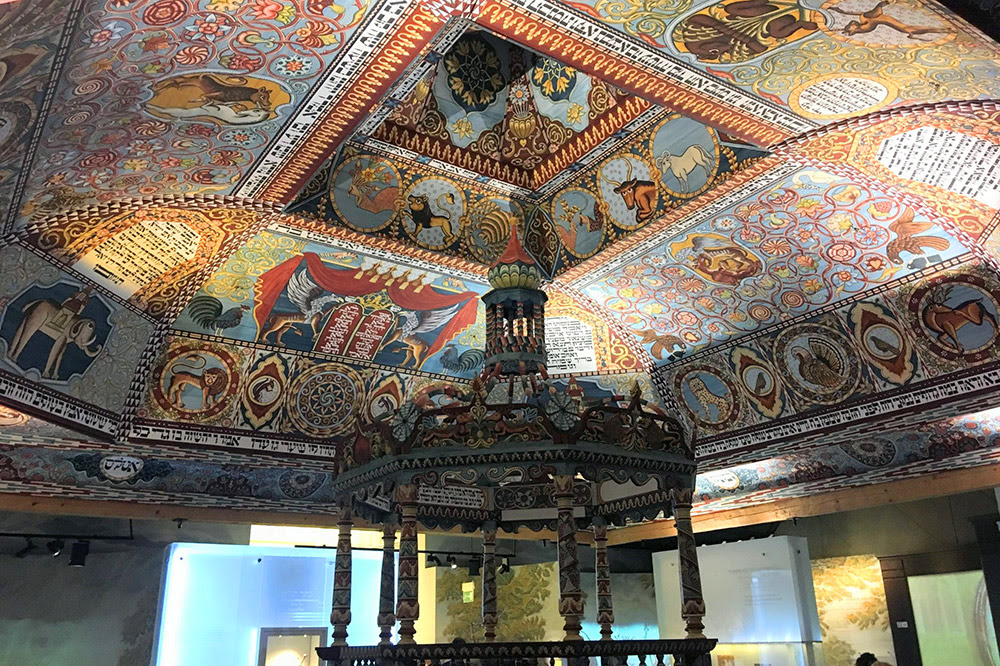 A place that introduces in a very accessible way the ancient history of the Jewish community in Poland. The Polin Museum was opened to the public in 2014. It is located on the same site, where the Judenrat (the Jewish council) was based during the war. Right in front you can see the moving monument of the Warsaw Ghetto Uprising.

The permanent exhibition presents the history of Polish Jewry in a very creative and illustrative way. What is the great value of this museum?

More than anything in showing the close relationship between the trajectory of the Jewish population and the destiny of the country where they lived. Continuing with the tour of the museum, you will learn about the dynamic development of the community, its culture, architecture and religion, but always with Polish history in the background.

The details that most caught our attention:

However you can explore the museum at your own pace. You can stop at various places looking for information on your own. A visit of 2 hours or all day depending on your interest. The enormous help are the audio guides in Spanish.

Tickets are worth 30 PLN. The museum is closed on Tuesdays. On Thursdays the entrance is free but does not include the audio guide, it is paid separately and the cost is 20 PLN 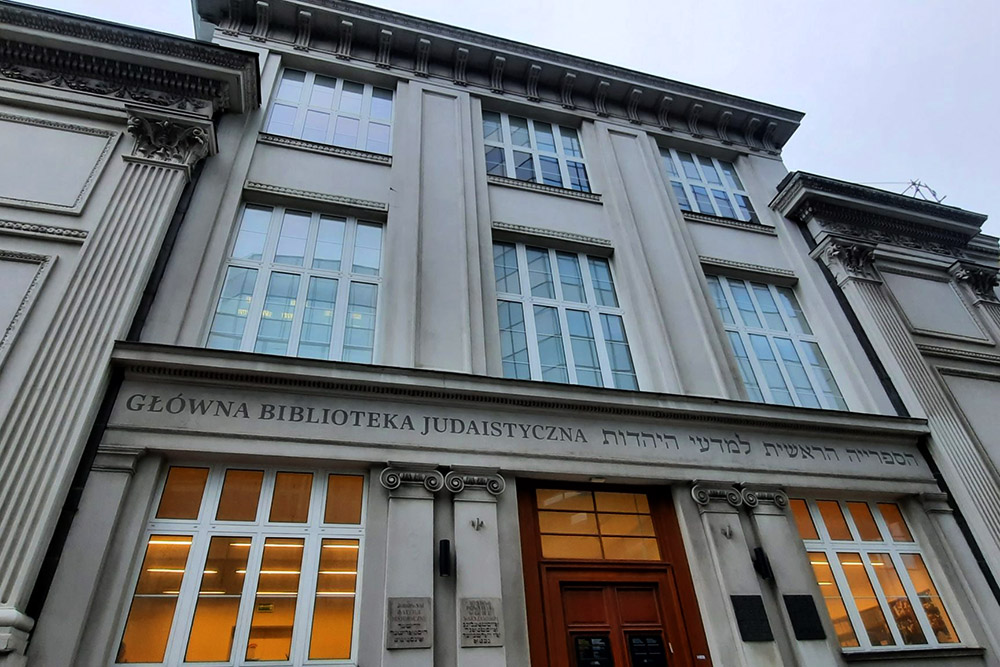 Number two on our list occupies the Jewish Historical Institute. It is a crucial place to understand the history of the Jewish community in Warsaw during the Nazi occupation. The permanent exhibition on the ground floor dedicated to the Ringelblum Archive will send chills down your spine. Wondering what it’s all about?

What we have not been able to shout to the world 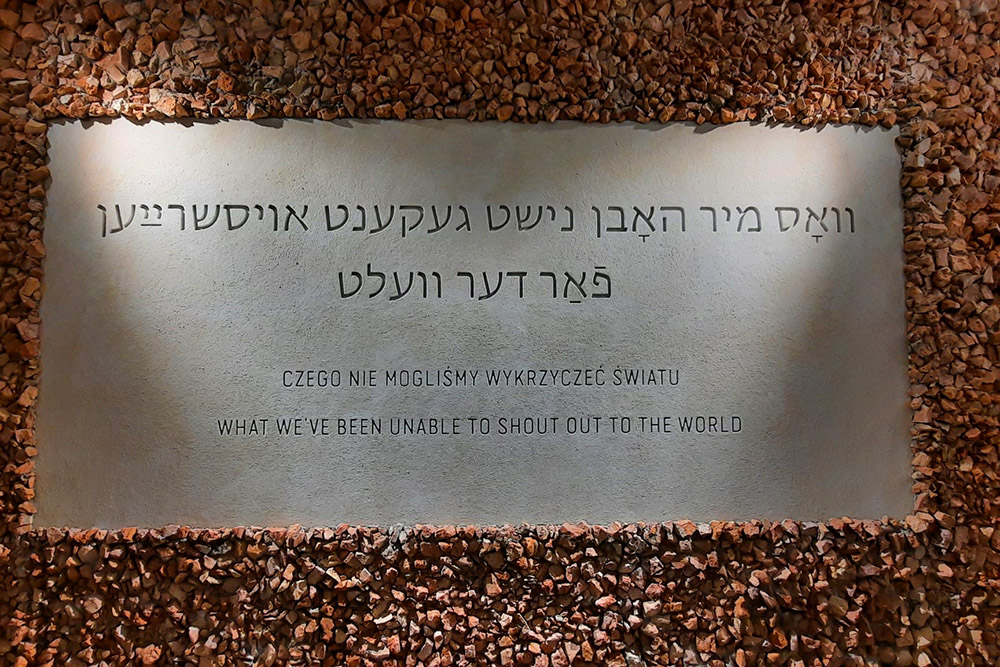 During the German occupation, the historian Emanuel Ringelblum, together with other activists, scientists and professors, created an underground organization Oneg Shabat (which in Spanish would translate to “the joys of Saturdays”). Its fundamental purpose was to document the life of the Jews in the Warsaw ghetto and the subsequent extermination perpetrated by the Nazis. The vast majority of the members of this organization, along with its founder Ringelblum, lost their lives during the holocaust. What was the destination of the file?

It seems hard to believe, but the vast collection of 25,000 pages made up of letters, testimonials and photos was hidden in metal boxes and tin milk bottles. Discovered in the rubble of the ghetto after the war, it is today the best evidence of the atrocities committed by the Germans. The exhibition is designed in a very symbolic way.

At the entrance you will see one of the original milk bottles where the documents were hidden. Some written materials in Yiddish, Hebrew and Polish are displayed on the glass counters. An extremely overwhelming experience. What blew us away were the numerous wooden beams of different sizes…

The first association that came to mind was the excessive crowding of Jews in the ghetto. You can imagine that in an area of ​​only 3 km² the Germans grouped almost 450 thousand people.

Next to the building is a tall blue skyscraper. Before the war, one of the most majestic and representative synagogues was located there – The Great Synagogue of Warsaw. It was blown up by the Nazis on May 16, 1943, when German troops crushed the Warsaw Ghetto Uprising. The destruction of this beautiful building symbolically put an end to Jewish Warsaw. Did you know how the SS Gruppenführer Jurgen Stroop responsible for pacifying the uprising summed it up in his memoirs? “Warsaw’s Jewish Quarter has ceased to exist”

After the war, the communist authorities decided to erect this modern building. Construction has taken more than 30 years, sparking rumors of a mysterious spell. It was said that the rabbis wanted to prevent the construction of anything new in the holy place. In the end, the 120-meter-high blue skyscraper was erected, which today houses the institute’s offices on one of the floors.

The entrance to the exhibition on the Archive costs 15 PLN. Mondays are free. On Saturdays it is closed.

3. Synagogue of the Nożyk Family 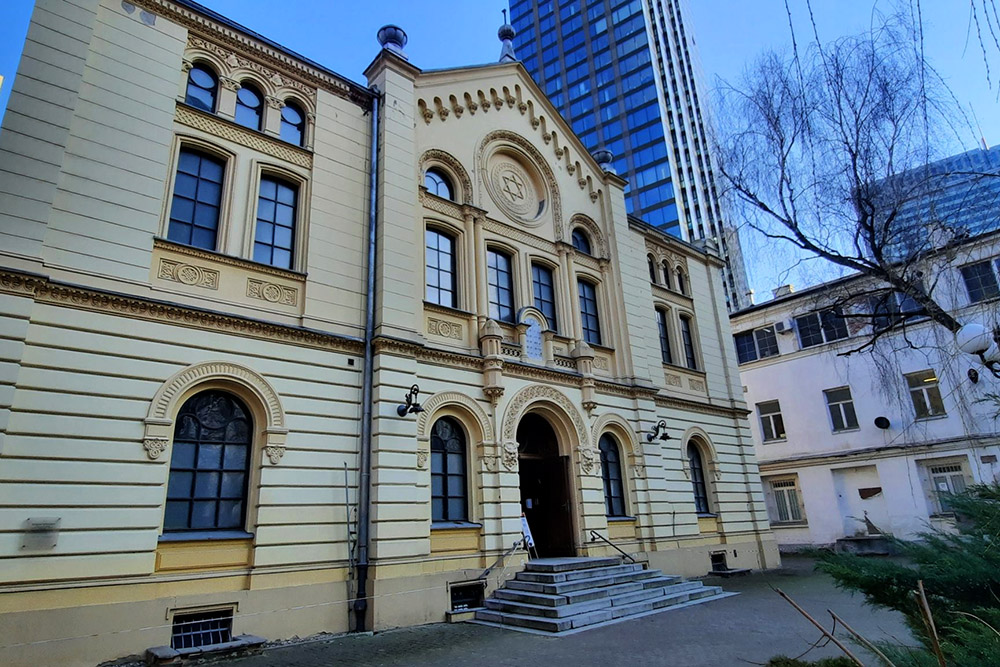 Located in the heart of the old Jewish quarter, the Nożyk Family Synagogue is the only surviving synagogue from the Nazi occupation. It was patronized by a wealthy merchant Zalman Nożyk and his wife in the late 19th century.

During the occupation the Germans converted it into stables and a wine cellar. It was seriously damaged during the Warsaw Uprising. In recent years, complex renovation works were carried out. You can enter by leaving a donation of 10 PLN.

The interiors feature the typical layout of a Conservative synagogue with the upper part reserved for women. Although the decoration is very modest, it is worth sitting on one of the benches, seeing the architectural details and contemplating what should never have happened.

Today it is an important religious-cultural center of Warsaw Jews. Next door is a store with kosher food. On Saturdays the venue is closed. 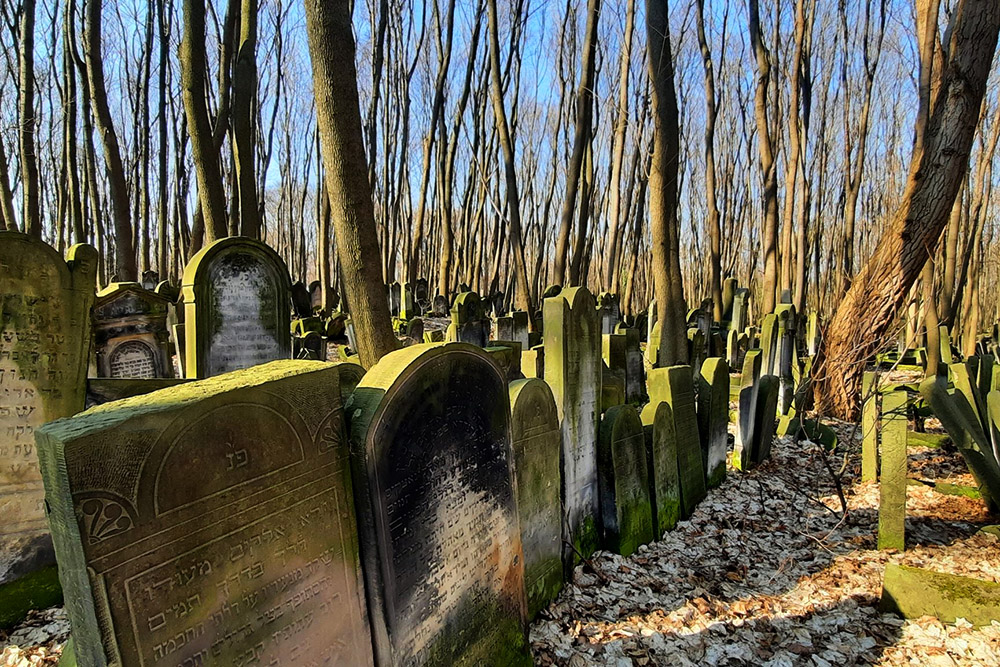 Number four on our list of Warsaw’s Jewish monuments is the sprawling Jewish Cemetery. Located in the Wola neighborhood, it was established in 1806. It has a large area of ​​33.4 hectares. The perimeter is divided into several sections, where the remains of more than 200 thousand people lie.

You will find there the important writers, politicians, religious or scientists, who over the centuries contributed to the development of the community. It is worth exploring the most distant parts, where among the trees and numerous matzevas (tombstones) one can calmly reflect on the lost world of the Warsaw Jews…

What left us shocked were:

The cemetery is open every day except Saturday. The entrance fee is 10 PLN. 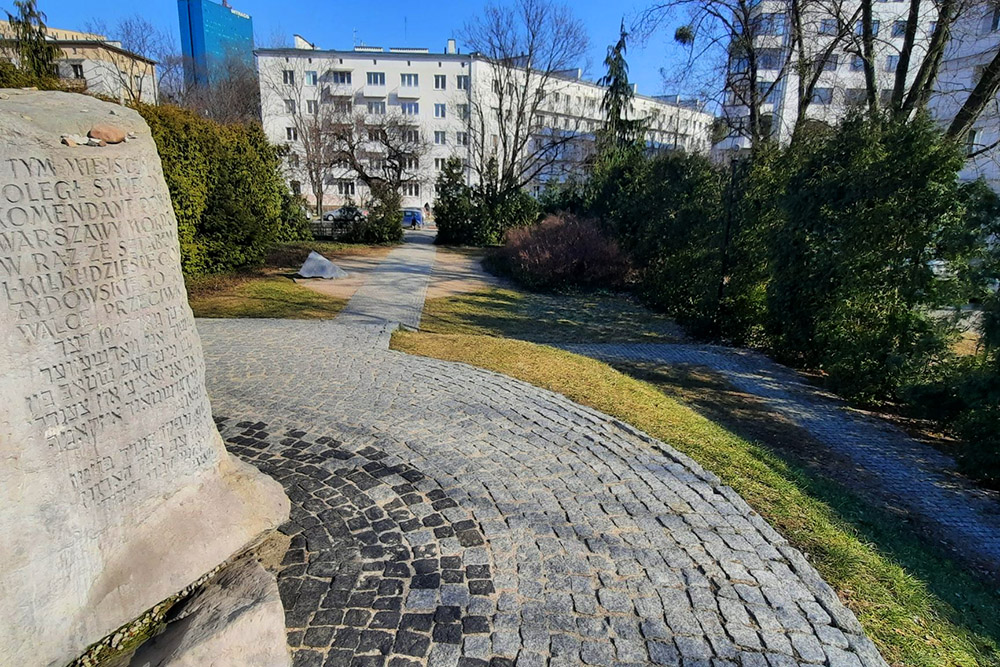 Number five on our list of Jewish monuments is located a 5-minute walk from the Polin museum square. You will find a small hill there. During the Ghetto Uprising, the building, which was located on Miła Street, had a well-equipped bunker in its underground part. It is where during the fighting the members of the Jewish Combat Organization took refuge with its leader Mordechai Anielevich.

The group of approximately 120 militants, surrounded by the Germans, decided to commit a collective suicide by shooting at each other. Only a dozen insurgents survived, many of whom fell in subsequent fighting. The corpses were never exhumed, so below the elevation the bones of the rebels rest eternally. You can climb the hill to read some information written on the stone in Hebrew, Polish and English.

Many Jews consider this place a small Masada – recalling the times of the Great Jewish Revolt against the Roman Empire. It was when besieged by the legionnaires in the year 73 after Christ, the defenders of the Masada fortress, learning that defeat was imminent, committed collective suicide.

For Israelis, the parallels between the two historical events seem obvious. Standing on top of the bunker, you can take your time to ponder the enormous symbolic load of this modest site on Miła Street and its importance to the Jewish national consciousness. 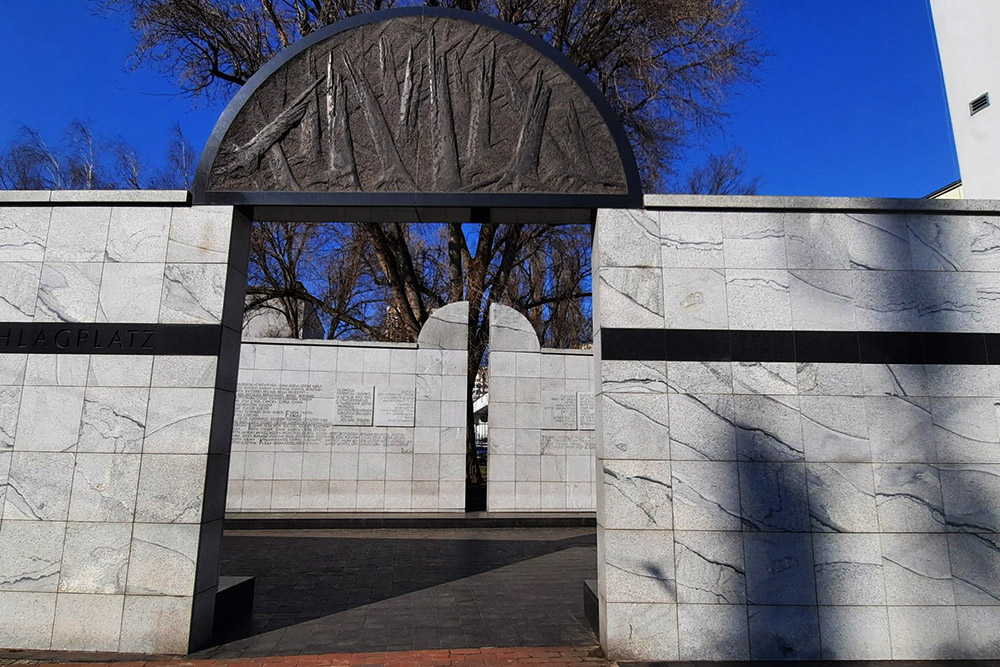 The last point in our list of the monuments of Jewish Warsaw closes the Umschlagplatz. At the time of the ghetto, the square was located next to the train station. In it, the Nazis gathered people designated for deportation to Treblinka and other extermination camps.

In the year 1988, the monument was erected, which pays tribute to the victims. It is composed of two walls that form a rectangular space between them. This distribution symbolizes an open railway car, in which the Jews were transported. On the walls in alphabetical order appear the 400 most popular names of Warsaw Jews. What moved us were the 4 elements of this art installation:

There ends our list of sites related to the Jewish heritage of Warsaw. A tragic but important topic. To deepen your knowledge about these historical facts and the importance of the places you can take our free tour of Jewish Warsaw. However, one thing is crystal clear – better insight into this dark part of history will help all of us build a better future for humanity. Tell us in the comments, how was your visit to the Polish capital? See you in Warsaw!

PrevPreviousThe 5 best bars in Berlin… out of the clubs.
NextFootball in WarsawNext