8 places you shouldn’t miss in Frankfurt

8 places you shouldn’t miss in Frankfurt

Do you know Frankfurt am Main? … Yes, I already know the answer… The city Heidi moved to when she left the mountain or a place where there are a lot of sausages. But besides that, do you know any other little thing? We hope the answer is no, and continue reading this blog with the best places to see in Frankfurt. Let’s go!

The financial city par excellence and center of Europe. Frankfurt am Main or Frankfurt am Main is a commercial and financial city in western Germany, specifically in Hesse. Historically speaking, we find a city that was a Free Imperial City; on the other hand, during the Holy Roman Empire they chose and presented the German emperors. At the same time, the first German parliament was formed in this city and the first constitution was drawn up in the Paulskirche. In addition to all this, it was, of course, the city that gave birth to the great Goethe.
Going back to today, Frankfurt has one of the most important international airports in the world, the headquarters of the European Central Bank, and of course, the most stable stock market known. And something I forgot to mention… the Messe, the place where fairs such as the book fair, the automobile fair, are held. Yes, in summary, Frankfurt has a lot to see and teach, but I am not going to dwell on these topics any longer, since we explain them wonderfully in our Free Walking Tours through Frankfurt, and we invite you to join them… but do you Would you like me to give you some more recommendations so that you continue discovering this beautiful city on your own? Here we go! 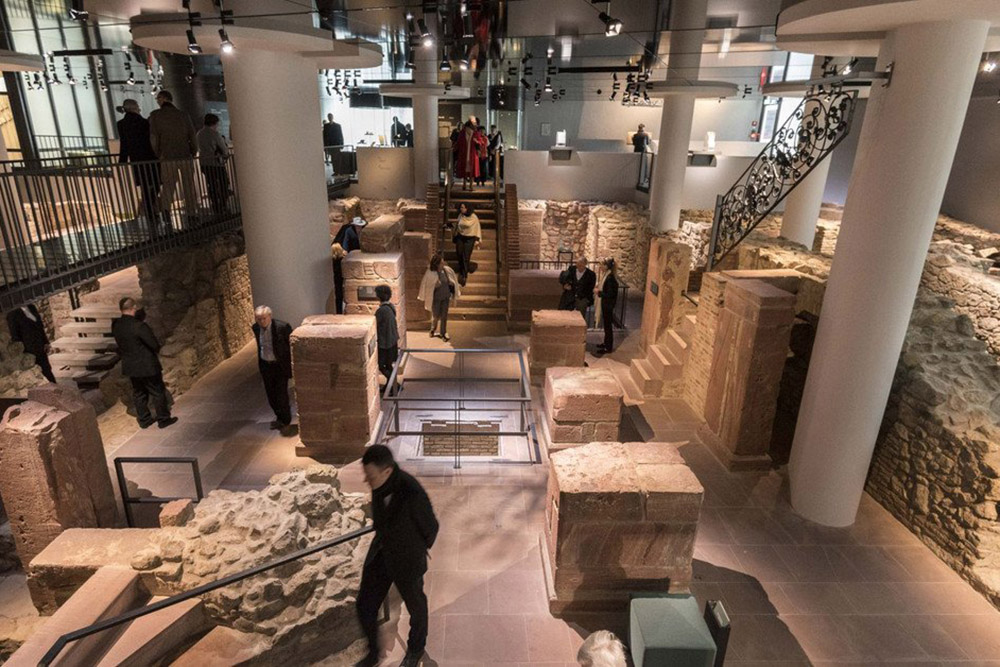 This Jewish museum was built right where they found the foundations of a Jewish ghetto, later it was learned that this ghetto was the first Jewish ghetto in Europe founded in 1460 and was a very important Jewish cultural center. In this museum you will find an exhibition of Jewish history and culture in Frankfurt from the Middle Ages to Jewish emancipation. Right next to the museum we find a memorial to the Jews of Frankfurt who were murdered in the Nazi era and a Jewish cemetery.

In addition to the Judengasse Museum, did you know that there is also another place where we can continue learning about Jewish culture in Frankfurt? Specifically from one of the world’s best known Jewish families. Do you know which family I am talking about? From the Frank family, if little Anne Frank was born here and lived here for her early childhood. To continue learning about the subject, you can visit the Jewish Museum of the Rothschild Palace located about 15 minutes walk from the historic center. At the same time you will also be able to learn about the history of the Rothschild family, a Jewish family of vital importance in the city.

2. Grossmarkhalle or Wholesale Market in Frankfurt

This place, where today we find the new headquarters of the European Central Bank, was nothing more than a large wholesale market. And you may wonder, why do they come to show us a market? Yes, I’ll get to it, one moment. This place also occupies a bitter and dark point in the history of Frankfurt. There are also some train tracks around here, and in 1941, it was the place where Jews were rounded up for deportation. If you walk around here, you will be able to see small writings on the ground by people who lived through that torment in some way. 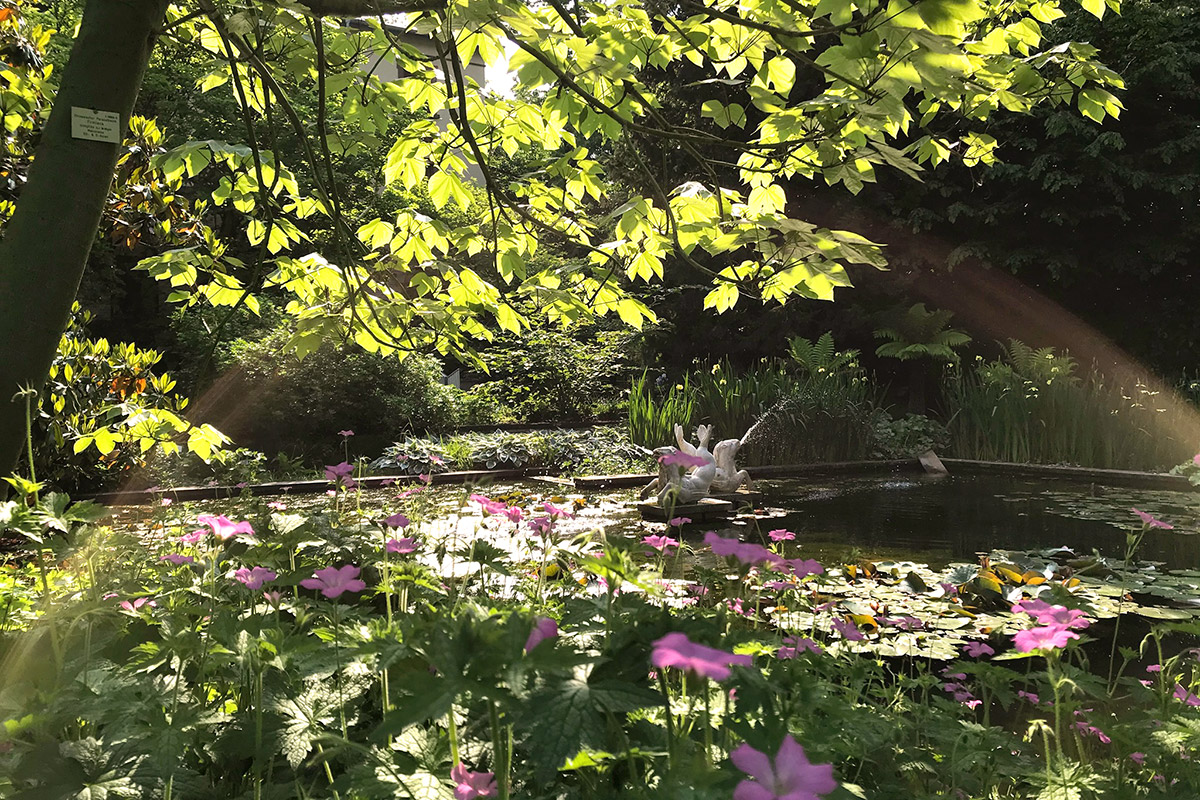 With this name, what can you imagine that I am going to tell you? Of course, we are in front of a garden, but not just any garden, but a 22-hectare botanical garden in which we can find plants from all over the world. It is located in the western area of the city, a little far from the historic center, but with the metro you get there very quickly and you will be able to enjoy an unforgettable experience. It is a good place to disconnect from the stress of the city and enjoy nature in all its splendor. A curious and interesting fact is that
during World War II, this garden was used as a large city orchard, where food was grown for the inhabitants. Of course, after the bombing it was completely destroyed, although it would be rebuilt later. 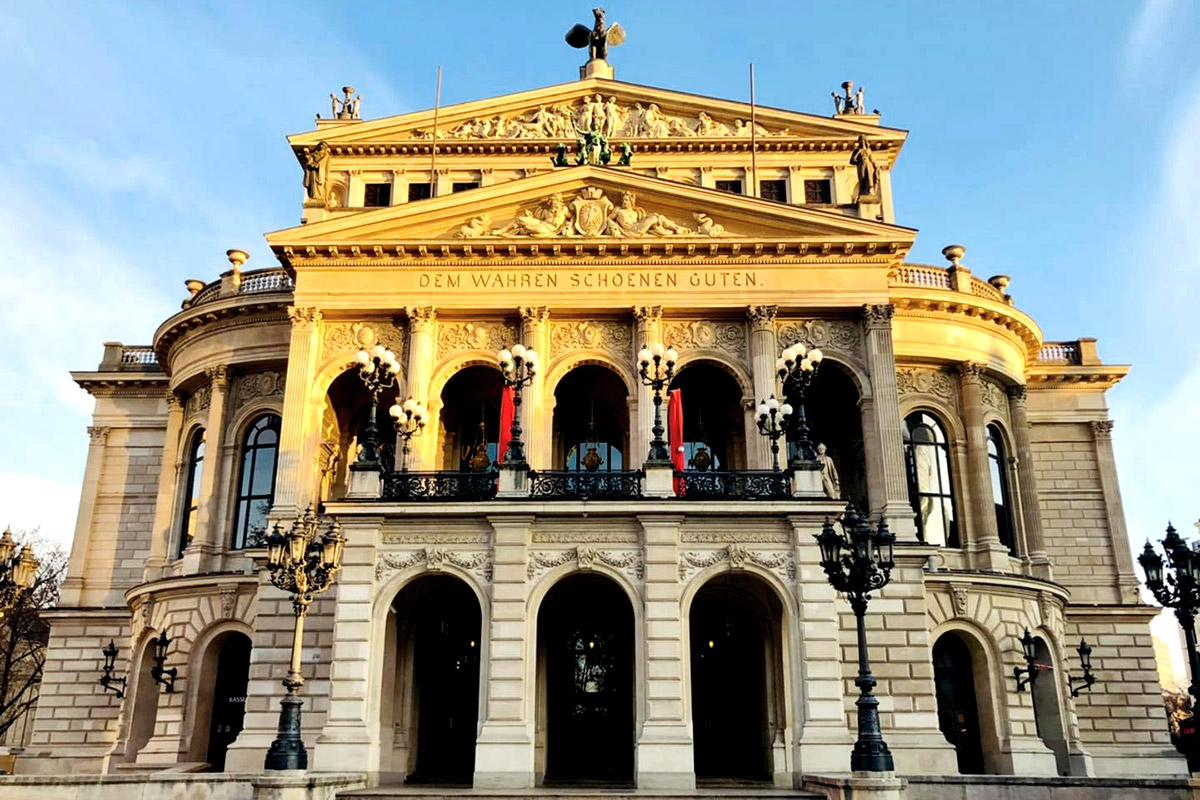 This beautiful neo-Renaissance style building is the Frankfurt music theater built in 1880, although it was destroyed during the bombings of 1944, and later rebuilt again. Today this monumental building serves as a concert and congress hall. Do you like musicals? And I say… you can still find out what event is on and do a two-for-one: visit the Frankfurt opera house and enjoy what it has to offer. In addition, it is located in the center of the city in front of a beautiful park full of sculptures and wonderful corners. 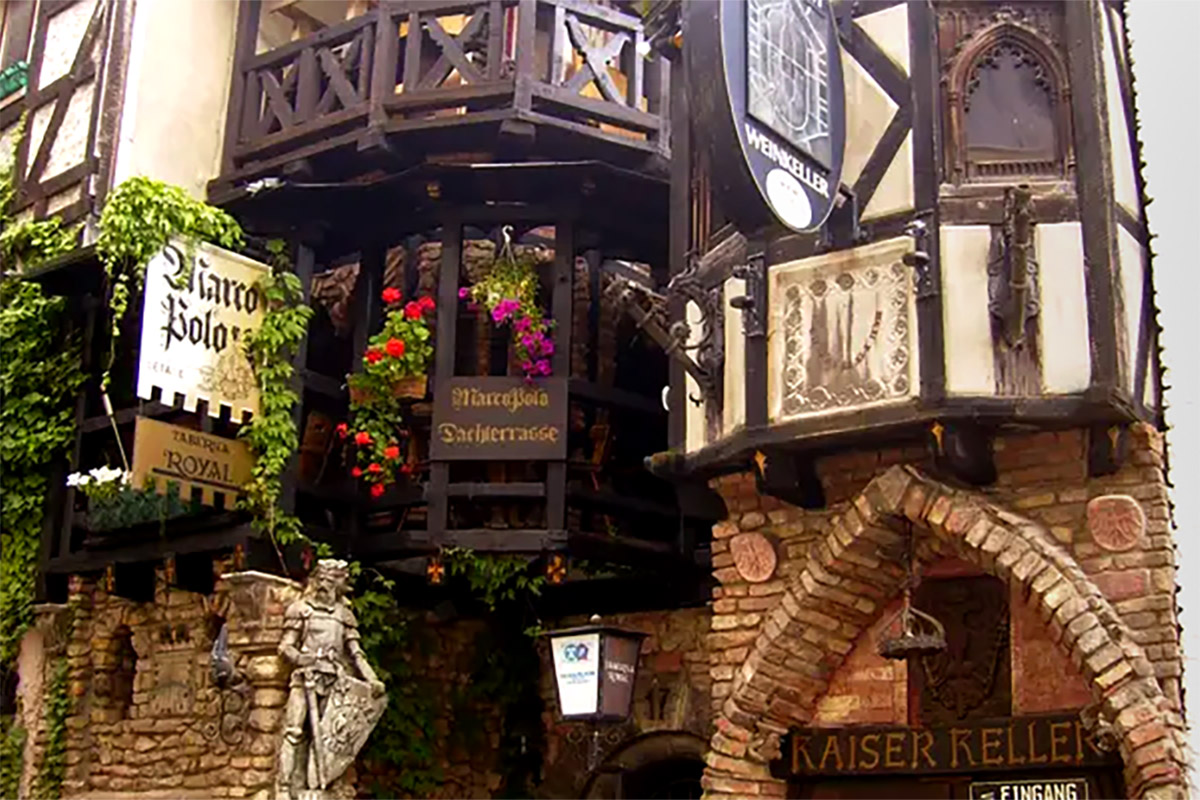 We are in front of a typical German neighborhood full of cider houses and restaurants to try the specialties of the area, although it is also known for being a neighborhood with a lot of nightlife, due to the enormous number of bars and pubs that you will discover along its narrow streets. . On the other hand, the typical half-timbered facades of the buildings are very striking. Do you want to enjoy a day in a very German atmosphere? Do not hesitate to go through here. If, on the other hand, you feel like going to a party more, or celebrating a bachelor party, this is also the place! There is always movement! And best of all, in the morning everything is pristine again for the early risers. 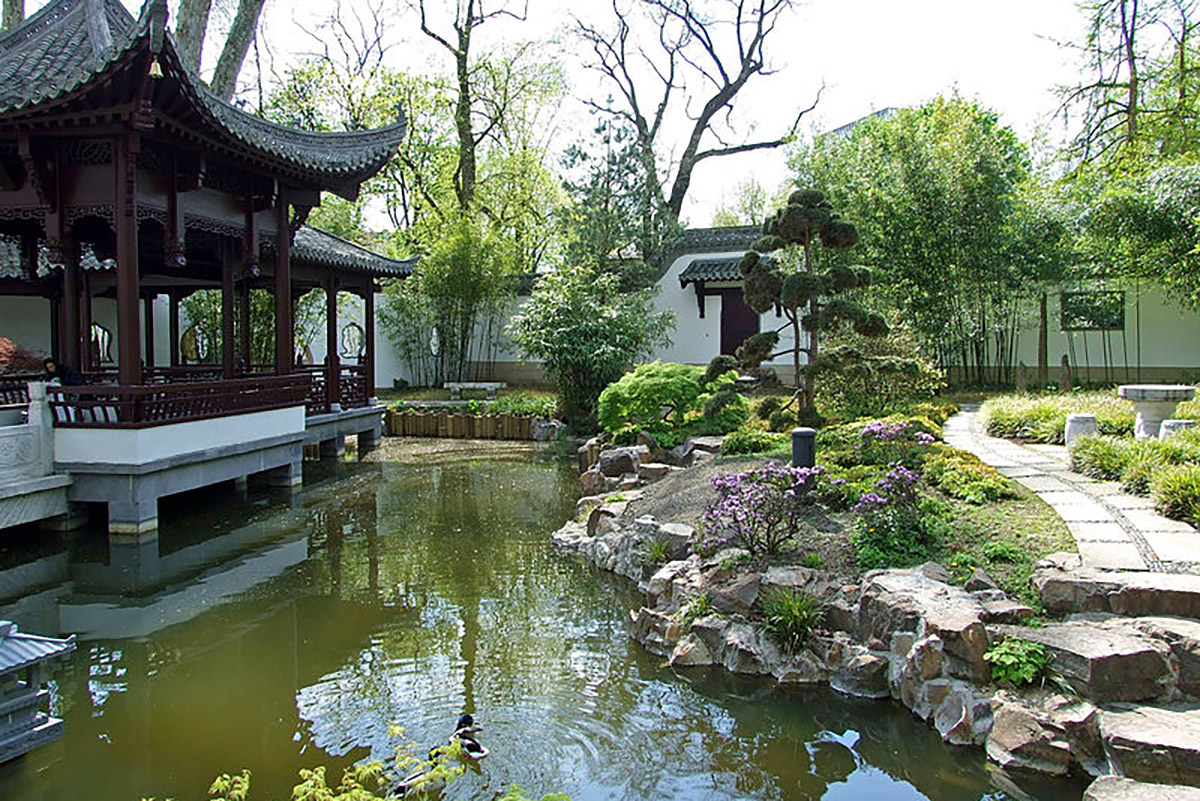 It is a relaxing garden built inside the Bethmannpark and a very short distance from the center of Frankfurt -you can even go for a nice walk-. It is said that it is a place to relax, and with this to be able to reflect and make better decisions. The Shiukou-Gärten of Huizhou (China) were taken as a reference. A bit of Chinese culture in Frankfurt? Without a doubt, you will enjoy it. 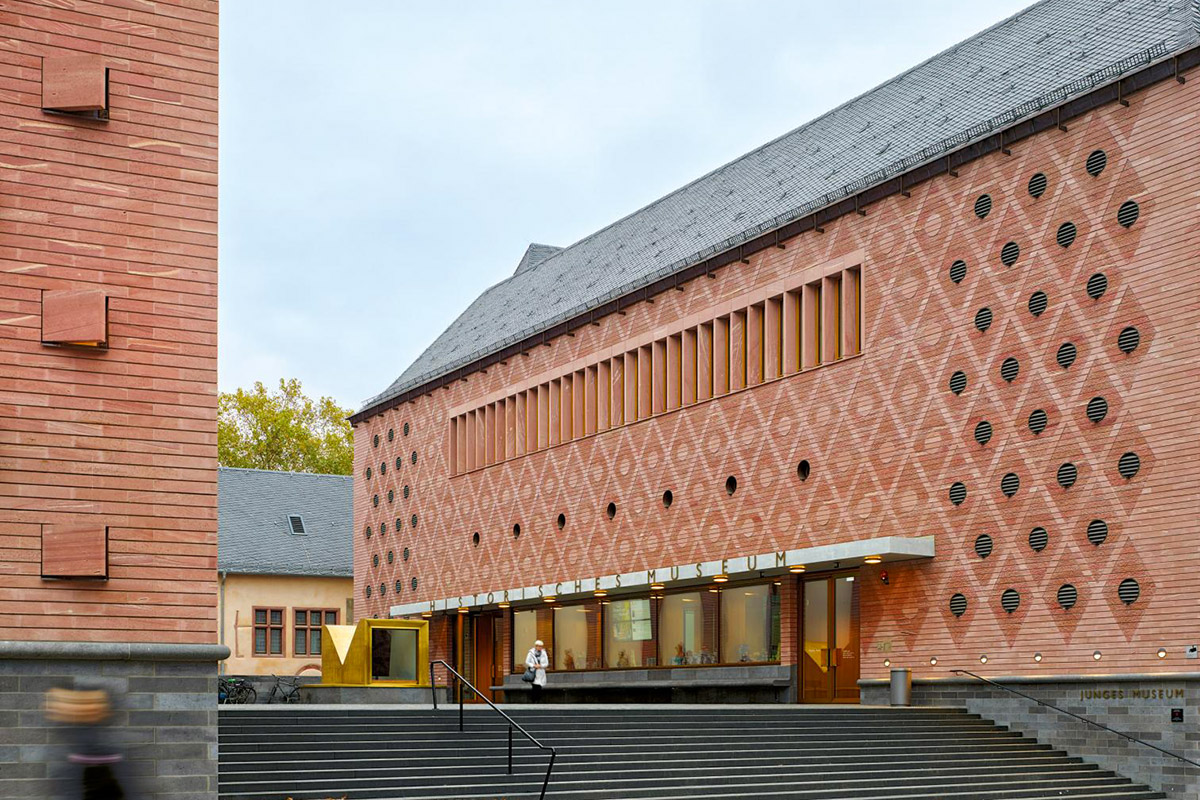 One of the museums that you cannot miss if you are history lovers, since with this visit you will learn not only about the city, but also about the history of Germany in general, is the Historical Museum. It was founded in 1878 with the purpose of gathering, studying and exhibiting everything related to German culture and history. During the bombing, as happened in practically the entire city, this museum was devastated, and many important documents were lost, although they were able to save a large part of them. They sensed what was coming, and they made good use of our adage: better safe than sorry. Thanks to this action, they were able to rebuild the museum, and it is at your complete disposal. Because the museum is in full
historic center and next to the river Main, there are no valid excuses. Cheer up to learn a little more and let yourselves be surprised by this very interesting trip to the past!