What to visit in Warsaw (8 must-see places)

Home » Blog » What to visit in Warsaw (8 must-see places)

What to visit in Warsaw (8 must-see places)

What to see in Warsaw? Generally, we associate the Polish capital with the Second World War. The Nazi occupation, the Warsaw ghetto and the complete destruction of the city. And it is not far from the truth because the tragic events of this global conflict left an unquestionable mark on the Polish capital. But let us surprising! Warsaw has so much more to offer!

We present our list of 8 recommendations to see in this charming city. It will be a bittersweet experience. You will visit places of importance, where you will be able to reflect on the atrocities and victims of the war, at the same time you will appreciate places such as the glorious past of the Polish-Lithuanian Commonwealth. You are ready? Here we go!

Our list of what to see in Warsaw opens the impressive museum located a few kilometres outside the historic centre. Located in an old power plant for public transportation trams, it will take you back in time to this memorable summer of 1944. It is when the largest civil rebellion against Nazi Germany broke out in World War II.

Known as the Warsaw Uprising, it was a clash of Polish armed resistance troops (Territorial Army) against the regular forces of the Third Reich and its allies. Despite a huge effort, it was a failure. Thousands of dead and more than 90% of historic architecture were destroyed. The metropolis, of almost 1.3 million inhabitants before the war, was almost completely depopulated, transforming itself into the immense sea of ​​rubble

Several rooms with many original artefacts and displays presenting the accounts of survivors are worth walking through. A copy of the American Liberator B-24J plane stands out (in 1:1 scale). These models were intended to drop supplies for the insurgent troops. There are no words to describe the other exhibits. You will find photos of the massacres of civilians, armed children and adolescents or so-called Robinsons. The survivors were among them Wladysław Szpilman – the protagonist of the famous movie Pianista (see our list of the best Polish films about the 2nd World War).

What is most impressive is a video showing for several minutes “the desert of the ruins”. It comes from an original recording of an area taken over by the allies after the war. It is a story of heroism, resistance, destruction and death. Essential to understanding the Warsaw of today.

The ticket is worth 25 PLN. On Mondays admission is free. On Tuesdays, it is closed. 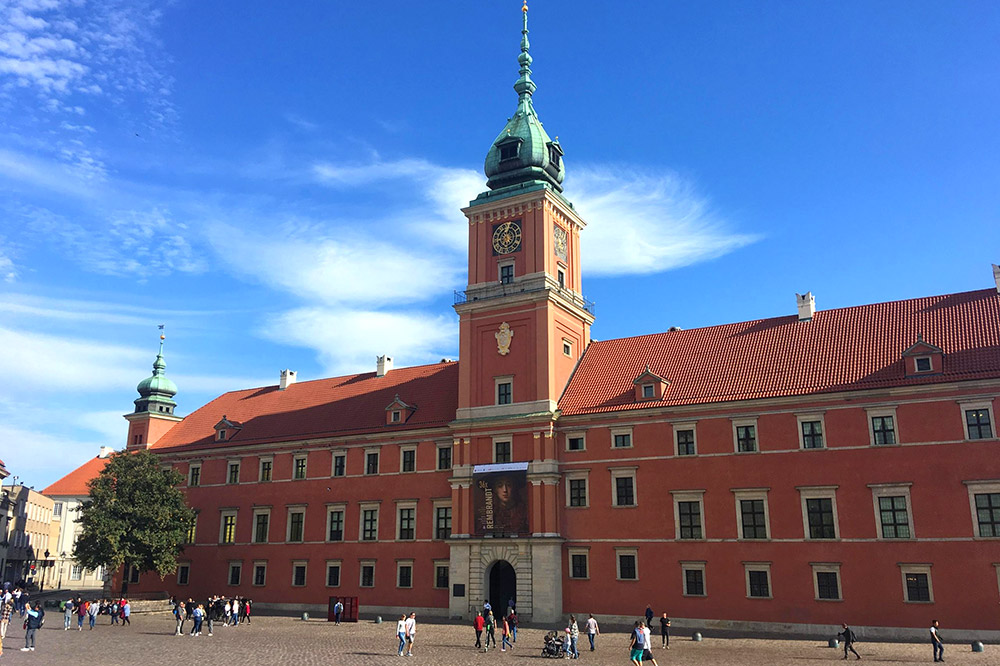 It is a mandatory point for all history lovers. Located in the heart of the old town for Poles remains a symbol of reconstruction after World War II. During the Launch, the Germans put the explosives to the building completely destroying it to the foundations. Just in the years 1971 -1984, a complex process of its reconstruction was conducted.

The walk through the various rooms will take you back to the time of the last Polish monarchs. A perfect option for those who want to learn more about the legacy of the Polish-Lithuanian Commonwealth:

The most important place historically is the Hall of the Senators. Inside it, on May 3, 1791, the famous Government Law was approved – one of the first constitutions in the world (only a few years after that of the United States).

The visit to the Royal Castle must be an indispensable point in the same way as Versailles in Paris. If you walk through the interiors you will find several clocks, all stopped at 11.15 hours and you wonder why? We explain it to you during our free tours through the historic centre of Warsaw.

3. Museum of the History of Polish Jews Polin- history of a long coexistence 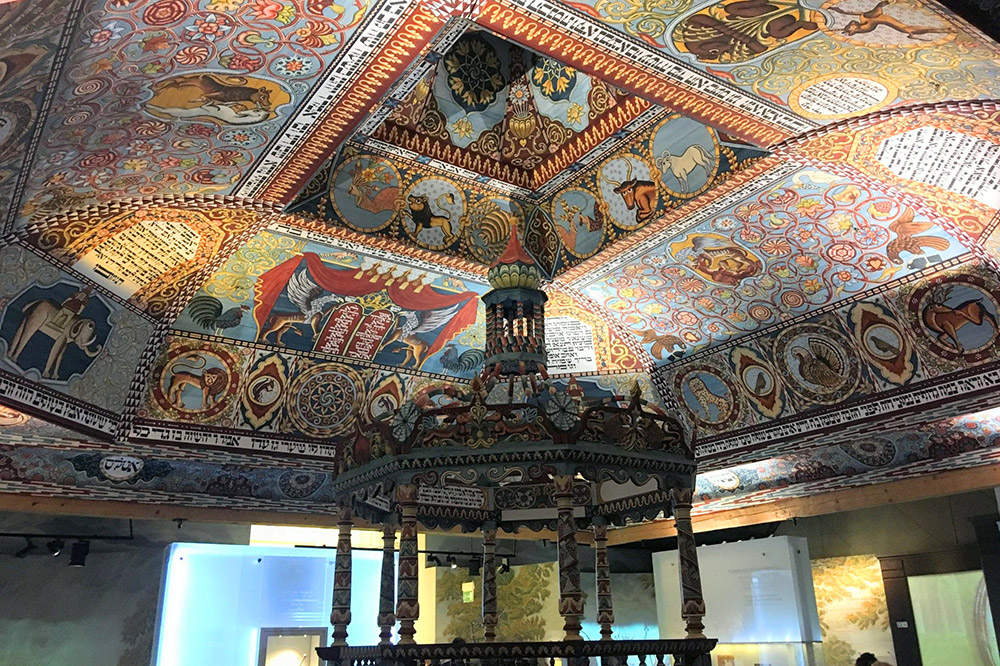 An unmissable place during your stay in Warsaw. It is a very modern museum opened to the public in 2014. It is located on the same site, where the Judenrat (the Jewish council) was based during the war. Right in front, you can see the moving monument of the Warsaw Ghetto Uprising.

The permanent exhibition presents the history of Polish Jewry in a very creative and illustrative way. What is the great value of this museum?

More than anything in shows the close relationship between the trajectory of the Jewish population and the destiny of the country where they lived. Continue with the tour of the museum, you will learn about the dynamic development of the community, its culture, architecture and religion but always with the Polish history in the background.

The details that most caught our attention:

However, you can explore the museum at your own pace. You can stop at various places looking for information on your own. A visit of 2 hours or all day depending on your interest. The enormous help is the audio guides in Spanish.

Tickets are worth 30 PLN. The museum is closed on Tuesdays. On Thursdays admission is free. 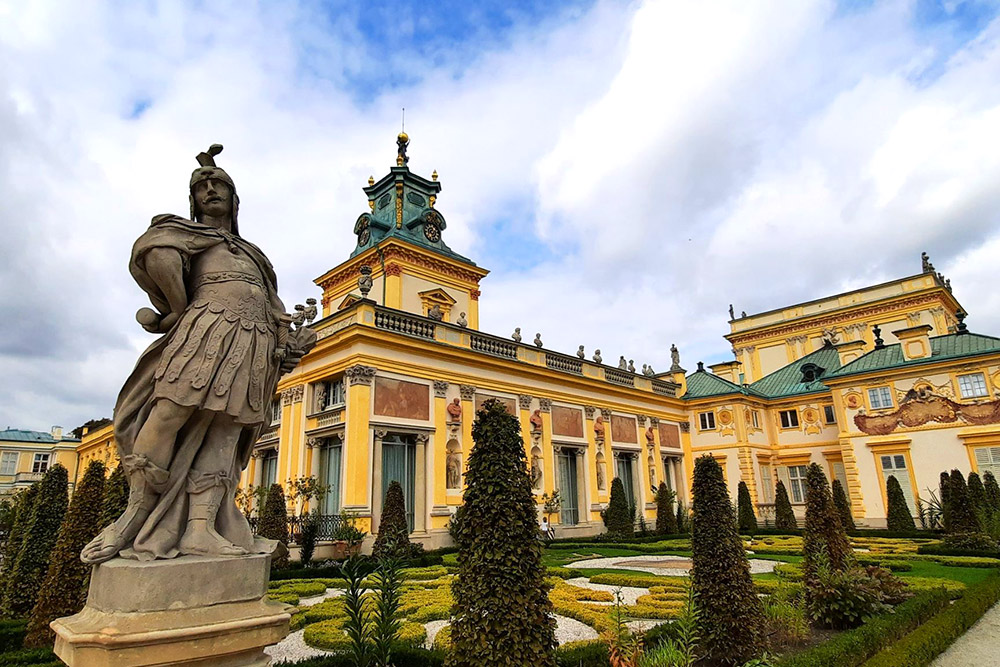 If you decide to move a few kilometres away from the historic centre, you will understand that this comparison is not completely out of place. Obviously, it is a much more modest palace. Wilanów was built in the second half of the 18th century as a summer residence for the Polish King John III Sobieski. The monarch did not like the bustle of the capital. On the contrary, he greatly enjoyed nature and rural work. That is why he had a beautiful baroque palace built surrounded by scenic gardens, parks and lakes.

The interiors will surprise you with a wealth of decorations, paintings and other works of art. They are not very big, but it is worth going quietly through each room enjoying various details, mythological and allegorical motifs.

What stands out are:

You will understand it by seeing another painting where she is accompanied by her 3 children, breastfeeding the fourth. Sitting in the left corner is his daughter Teresa (later married to Maximilian II Emanuel of Bavaria. That’s why you won’t be surprised by the coat of arms of the Polish-Lithuanian Commonwealth in the Theatine Church in Munich)

We are sure it will be a wonderful visit. Tickets cost 25 PLN including the gardens. On Tuesdays and Wednesdays, it is closed. Thursdays are free.

5. The Palace of Culture and Science – Stalin’s gift 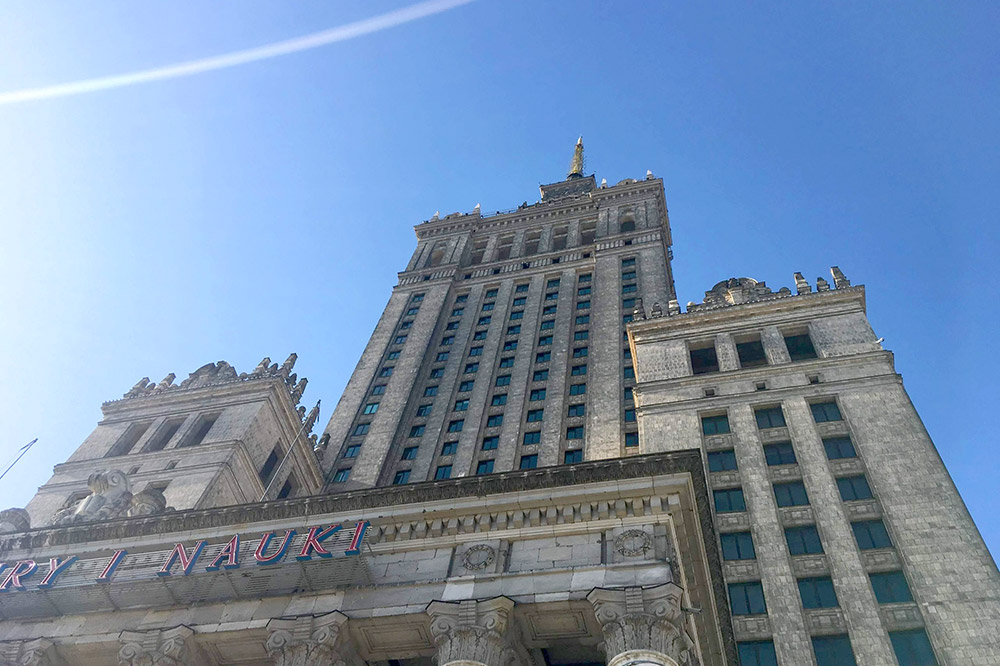 Another symbol of the city with a huge ideological load. Built in the worst period of communist terror, it symbolized the new alliance with big brother. A gift from the Soviet people to the Polish people – the inscription said. Initially, the building bore the name of Jozef Stalin.

For many Poles, it has always been a hated symbol of alien domination imposed by the Red Army. It should be noted that it looks a lot like the seven skyscrapers in Moscow called the seven sisters. However, Soviet architect Lew Rudniew incorporated Polish Renaissance motifs and local designs.

Can you imagine what impact this construction left in the post-war era? The blocks are almost empty or still full of rubble and in the very centre a huge and overwhelming “gift from Stalin” of 237 m?

Today the building houses several scientific and cultural institutions. The visit to the interiors is a true journey back in time to communist times! We particularly recommend the viewpoint located on the thirtieth floor. One enters through the main hall – cold and monumental very characteristic for the Soviet-style. The elevators also have a vibe. During the walk through the terraces from the heights of 114 meters, you can enjoy the various panoramas of the city reflecting a little on the multifaceted legacy of Eastern Europe.

Tickets cost 20 PLN, but it is worth buying them as soon as possible. Especially during the high season time (March – November). 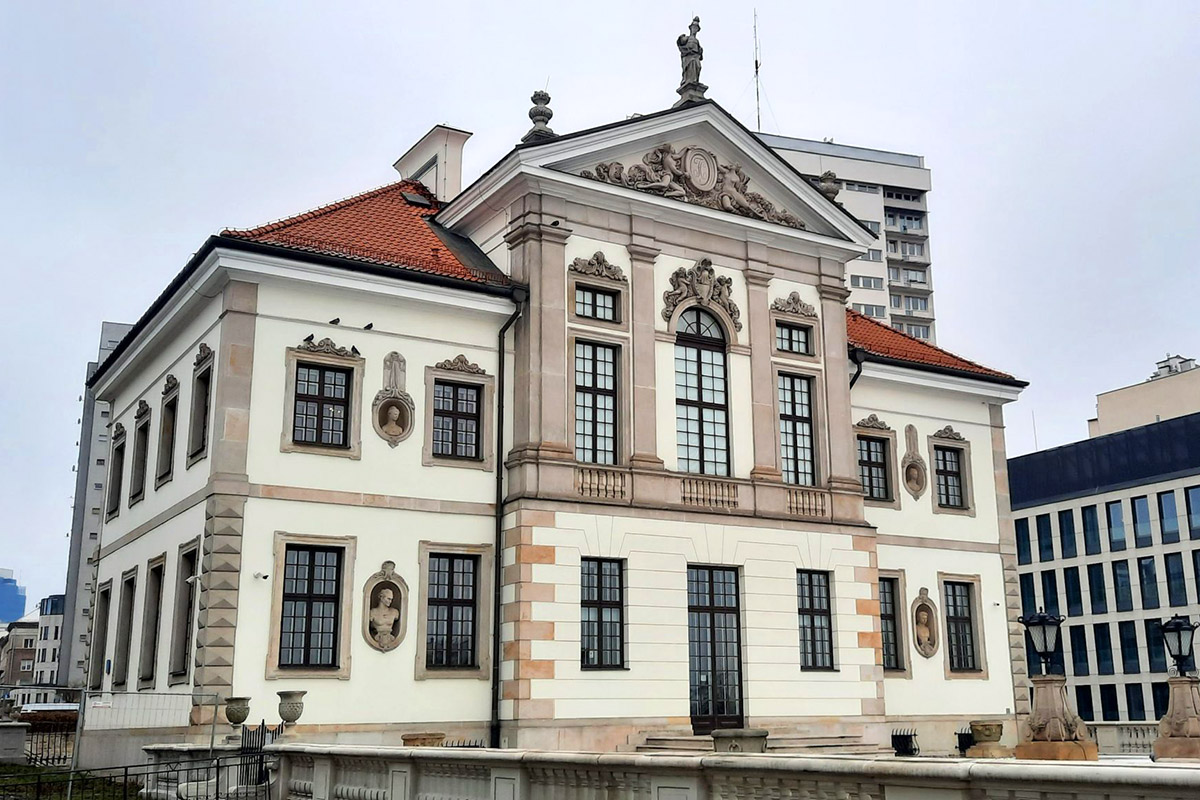 Although he was not born in Warsaw, Chopin’s childhood and youth are 100% linked to the Polish capital. It was the city of his first musical steps, friendships and loves.

The museum located in the old Ostrogski Palace has an excellent environment to recount the life and work of the Polish composer. The building was designed by the prominent baroque architect Tylman van Gameren (we recommend you also admire his Royal Chapel in Gdańsk)

The exhibition is characterized by the most modern solutions. Taking advantage of the interactive format you can learn about the life and legacy of Chopin. You can find personal belongings, authentic letters, paintings and engravings of the time.

You will meet Federico’s family, his circle of friends, women in his life and the process of composing. All this with the beautiful fragments of mazurkas and polonaises in the background! What moved us was the original Pleyel piano that he played in his last years and a prayer book, kept by the closest relatives.

It is a story of an extraordinary human being. A must for lovers of classical music. It is open from Tuesday to Sunday. Admission is 23 PLN. Wednesdays is free.

7. Łazienki – the dream of an advanced and independent country 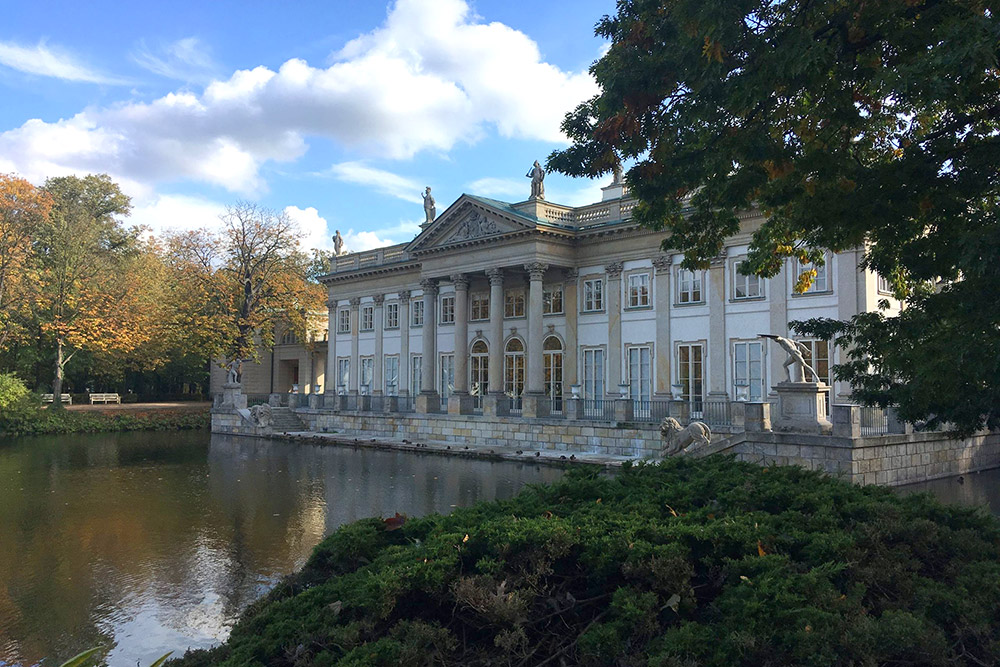 It is one of the most beautiful venues in Warsaw. In the summer season and with crowds of tourists, the extensive park looks like an enclave of peace and harmony. The name comes from royal baths that were in the vicinity of the Ujadów Palace.

During the reign of the last Polish monarch Stanislaus August the complex was redesigned as a royal summer residence. A beautiful palace was built on the island, which together with other architectural elements constitutes one of the most magical places in the Polish capital.

Estanislao Agosto was a great patron and lover of art. The palace was to express the king’s desire to create an illustrious and sovereign modern country. The broken dream, since the territories of Poland, were divided between Russia, Austria and Prussia and the country lost its independence for 123 years. Today the palace houses a collection of different works of art.

Walking through the park you can also visit:

The ticket to visit the entire enclosure costs 40 PLN. From Tuesday to Sunday. Friday is free. 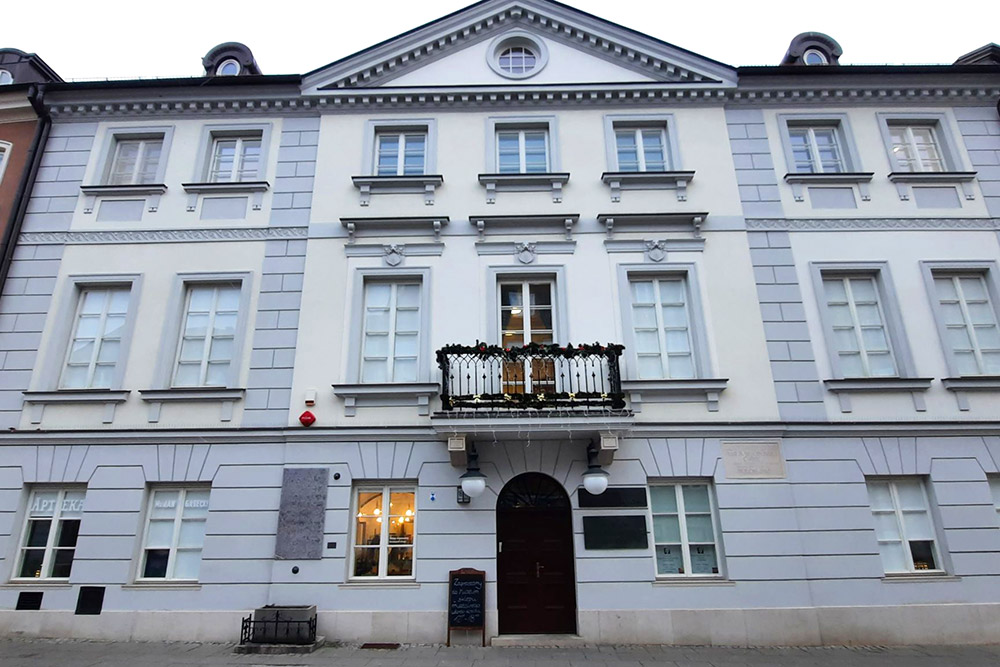 Lastly, closing our list is the birthplace and museum of the excellent scientist Marie Curie (her maiden name Skłodowska is also added in Poland).

If you ever thought I was French, we’re sorry to disappoint you. She was born into a family of Polish teachers in Warsaw in 1867 and later emigrated to France since the Russian partition did not allow university studies for women.

Together with her husband Pierre, they began scientific research in the field of radioactivity. She is the only Nobel Prize laureate who was awarded in two different scientific disciplines: physics and chemistry.

The museum is relatively small. However, it allows you to deeply study your professional career and private life. The most interesting part of the exhibition is the reconstruction of the Parisian laboratory of the Curie couple. In addition, many photos, documents or newspaper fragments, allow us to reflect on the great achievements of this brilliant mind and extraordinary woman.

From Tuesday to Saturday. The entrance fee is 11 PLN.

Our recommendations for nearby tourist attractions in the historic centre of Warsaw end here. Maybe you want to join us in our free walking tour in English? So, we can take you to one of these places adding explanations, anecdotes or other curious information…

PrevPrevious7 places in Prague you can not miss
NextWhat to see in Gdańsk. 8 places you should visit.Next