What to see in the gardens and palaces of Sanssouci?

Home » Blog » What to see in the gardens and palaces of Sanssouci?

What to see in the gardens and palaces of Sanssouci?

Surely you visit Potsdam attracted by the famous palaces and castles of the city and in particular by the famous Sanssouci Palace, however here comes the surprise: Potsdam is much more than this place, it has around 30 palaces and, in fact, the Sanssouci Palace It is located in the Sanssouci Park, which houses 3 more large palaces and a series of small palaces and historical monuments. This place represents a symbol in Berlin-Brandenburg since it is one of the two World Heritage Sites declared by UNESCO in this city (the other is the Russian village of Alexandrowka). That is why we want to give you a guide on how to visit the gardens and palaces located here easily, quickly and economically. 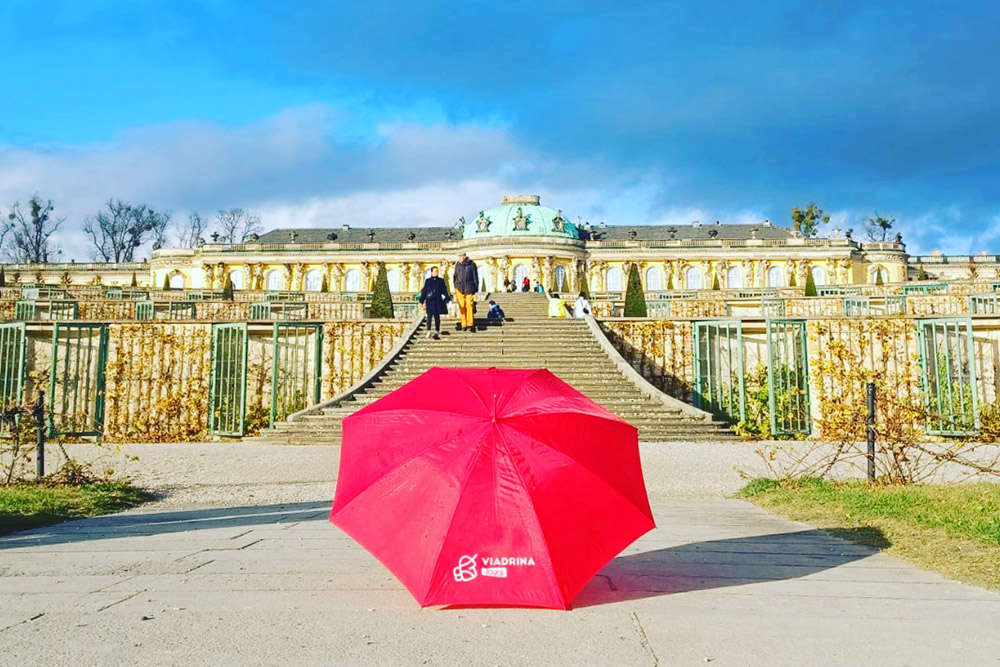 Among all the palaces in the city of Potsdam, without a doubt, the Sanssouci Palace is the most important, since it gives its name to this complex of palaces and gardens. Without
However, it is currently the most humble and smallest in its construction…. And then why so much fame?

King Frederick II “The Great” (or “Old Fritz”) had this palace built in 1745, as a “refuge” from his and the court’s administrative activities, hence its French name translated as “carefree.” Here he could carry out his passion for philosophy, music and enlightened thought of the time and, therefore, he transformed it into his favourite place where he could share with the main characters of the time. Doesn’t that seem so surprising to you so far? Also, the French philosopher Voltaire lived here from 1760 to 1762, invited by the king and together they discussed exciting topics of philosophy and contemporary politics. This place was also the one chosen by the king to spend his last days and where he would be buried, which was fulfilled in 1991 when his body was finally transferred, so we can also visit his tomb and be surprised by the tributes that the population gives to the monarch. Why might we be surprised by these tributes? We can find out on our tour 😉

The love and dedication projected on this site make the baroque construction style (common in the buildings of the time built by this king) advance to the architectural style currently known as “Federician rococo” and this title is not an exaggeration, since if we visit Inside we will find the famous “Marble Room”, the “Sanssouci Flute Concerts” room, the art galleries and the bedrooms or chambers of King Frederick II “The Great” or Voltaire himself.
Do you think of Versailles in Paris? Of course, you can visit this place known as the “Versailles del Norte” by buying a ticket that allows you to visit this palace (for €14) or the rest of the palaces (€19) that we are going to recommend. 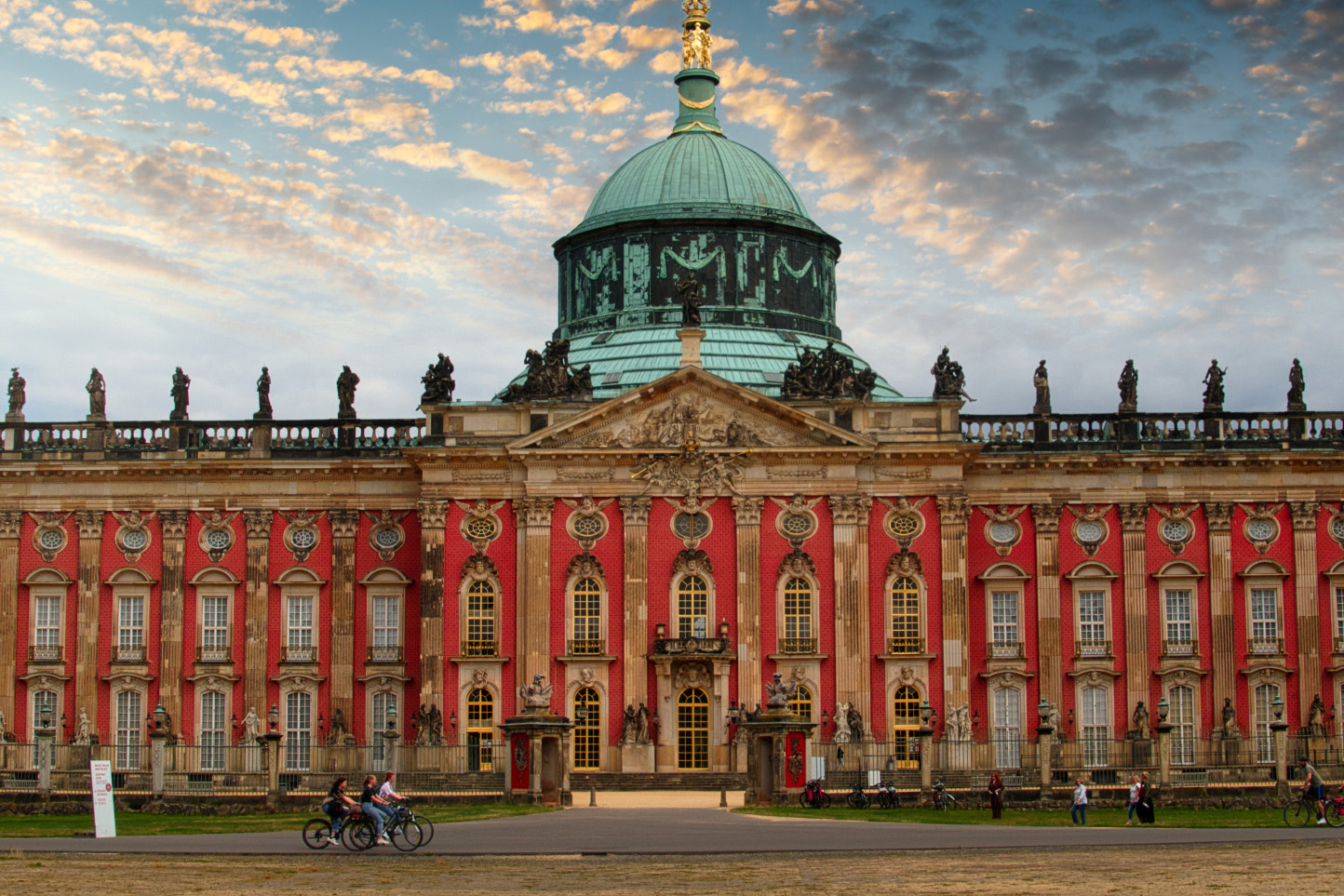 On the other side of the Sanssouci Park is the largest palace in the enclosure: The New Palace, a three-story building that contrasts with the humility and modesty that the Sanssouci Palace represents, since King Frederick II “The Great” himself commanded it to be built as a test of Prussian power after the completion and victory of the Seven Years’ War (between 1756-1763), even after three wars Prussia’s economy was intact.

The interior never ceases to amaze and amaze us, since, in addition to finding an exquisite architectural style, we will find art galleries (among the most important in Germany) and mirrors (Did we tell you something about the Palace of Versailles before? Another proof if you compared to the Hall of Mirrors), the main bedrooms which are one of the greatest proofs of the Federician decorative art (rococo) and, finally, we can visit the palace theatre (active again since 1969) which constantly offers shows to the community. Remember that you can visit this place by purchasing an individual ticket (€14) or the one that allows entry to all the palaces (€19) and that we already occupy in the Sanssouci Palace.

Since its construction, this palace has become one of the favourites of the Hohenzollern family, who is this family? it is the family of the Prussian and German dynasty to which all the Prussian kings and German emperors that we recognize today belonged. In fact, the last German Emperor Wilhelm II fled from this place in 1918 (at the outbreak of the First World War), and with it the monarchy in Germany ended. As you can see, the importance of this site lies not only in representing the way of life of royalty at the time but it in the tremendously historic site that defines Germany today, so you can not miss it.

A recommendation! If you don’t want to spend so much time walking through the park from the Sanssouci Palace to the New Palace, take bus 695 next to the first towards Neues Palais. If you have the one-day ABC ticket, it is included in your journey, otherwise, you must pay €2.40 on the same bus. You will travel inside the park in 5 minutes, a route that would take 45 minutes on foot. 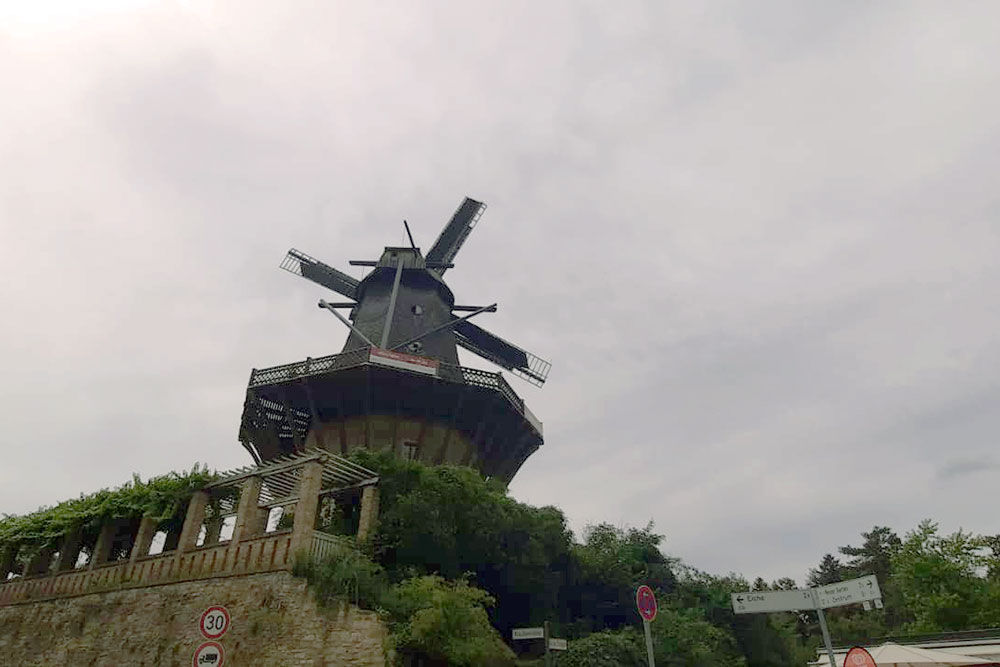 At the beginning of the 18th century, King Frederick William I “The Soldier King” (father of King Frederick “The Great”) built a Dutch quarter in Potsdam and invited artisans and farmers from the Netherlands with the aim of building the city correctly and modernize agriculture in the area. Currently, we not only visit the famous “Dutch Quarter” as a vestige of the Dutch of that time but also this mill, which is the only one that remains active of the nearly 40 that were in the eighteenth century operating in the surroundings of Berlin and Brandenburg and where, in addition, the “Sanssouci Bread” is produced, which we can buy in the mill shop. We also recommend that you visit the mill restaurant (you can read the review here).

Legend has it that King Frederick II “The Great” disturbed by the noise and movement of the mill, threatened the owner so that he would sell this property, however, the imperturbable owner rejected him and indicated that his power could not force him since he could resort to the simile of the Berlin Supreme Court. At that time, not even “His Majesty ” was above the Court of Justice, so the king had to give in. Is this story myth or reality? We can find out on our free walking tour of Potsdam.

The Oranges Palace or Orange Tree Conservatory is the last and largest building in Sanssouci Park, built by King Frederick William IV “The Romantic” takes as a construction model the Villa Medicis in Rome and the Uffizi Palace in Florence, so it clearly documents the king’s admiration for Italy.

The building is a construction that dates back to 1851 and is more than 300 meters wide, so its pavilions or wings are currently constantly used as event rooms (which are even among the largest in the Berlin and Brandenburg area ).

Do you wonder why his name? It is not a paradox, but rather a reality since its gardens and the main building has served for the hibernation of plants, trees and flowers that are more sensitive to cold, in fact, we can still admire how these exotic crops have been carried out here. In addition, we can tour the rooms that were prepared in their time for the Russian imperial family (Tsar Nicholas I and Tsarina Charlotte of Russia), great friends of the German royal family.
Remember that all these sites can be visited with the purchase of the same ticket. The most entertaining thing is that we can also visit this place by getting off at the previous stop of the same already recommended 695 bus: take note!

Towards China and the East: Chinese Tea House and The House of the Dragon

In the 18th century, the Prussian royalty had a marked admiration for oriental and Chinese cultures, and the Sanssouci Park is proof of this by having the Chinese Tea House and the Dragon House built. The first was frequently used by the noblewomen invited to the various palaces in the park, and the second was designed on the basis of a Canton pagoda and served as accommodation for the viticulturists of the royal vineyards.

Charlottenhof Park and Church of Peace 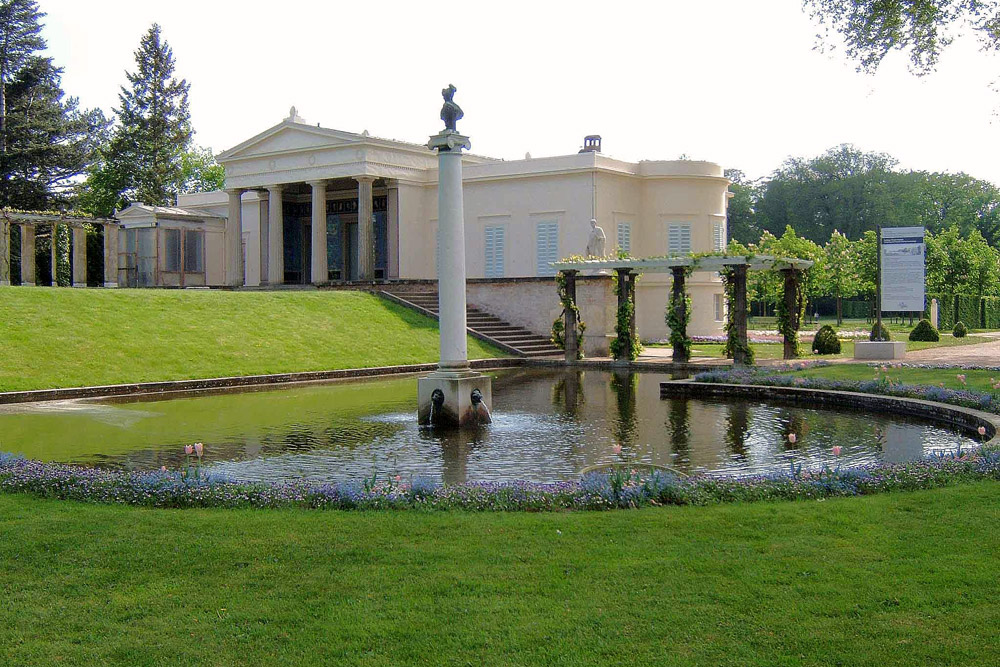 In addition to everything we have shown you, in the Sanssouci Park we can find many other places of interest, such as the Charlottenhof Palace and the Charlottenhof Baths:
The young prince who would later become King Frederick William IV “The Romantic”, and who we have already seen, was a fervent admirer of the Italian classicist style, ordered the construction of this site influenced by Italian Roman villas to express his admiration for the country South and the time of the Roman Empire. The architect in charge of the construction was Karl Friedrich Schinkel, and surely you remember him for being the favourite architect of the time building buildings such as the Altes Museum or the Brandenburg Gate in Berlin.

Finally, breaking the traditional religious neutrality of the Prussian dynasty, in 1845 King Frederick William IV “The Romantic” himself, following his admiration for the classical Italian style, ordered the construction of the “Church of Peace” which caused a secular earthquake in the time, as it promoted the monarchical claim to rule by “the grace of God”; which would ultimately be one of the causes of the crisis that led to the end of the Prussian Kingdom, later transformed into the German Empire in 1871.

As you can see, the Sanssouci Park is more than a palace, it is full of the magic of the 18th and 14th centuries and we can see it in the different places that we have detailed in this post. If you want to have a unique experience and discover everything about the city of Potsdam, do not hesitate to take one of our Free Walking Tours with us, we are waiting for you! 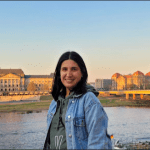