What to see in Leipzig (8 Places you must visit)

Leipzig – the city of food and music

Have you ever heard of the city of Leipzig? Located in the western part of Saxony, it has always been an important intersection of European trade routes. During the famous imperial fairs, merchants, artisans and travelers from different regions of the old continent met here.

Add to that the exceptional musical legacy left by Bach, Wagner, Mendelssohn and Schumann and we get an incredible mix of culture and history that will make you fall in love with this Saxon city. Do you fancy? In this post we will recommend the 8 most important tourist attractions you must see in the beautiful city of Leipzig! 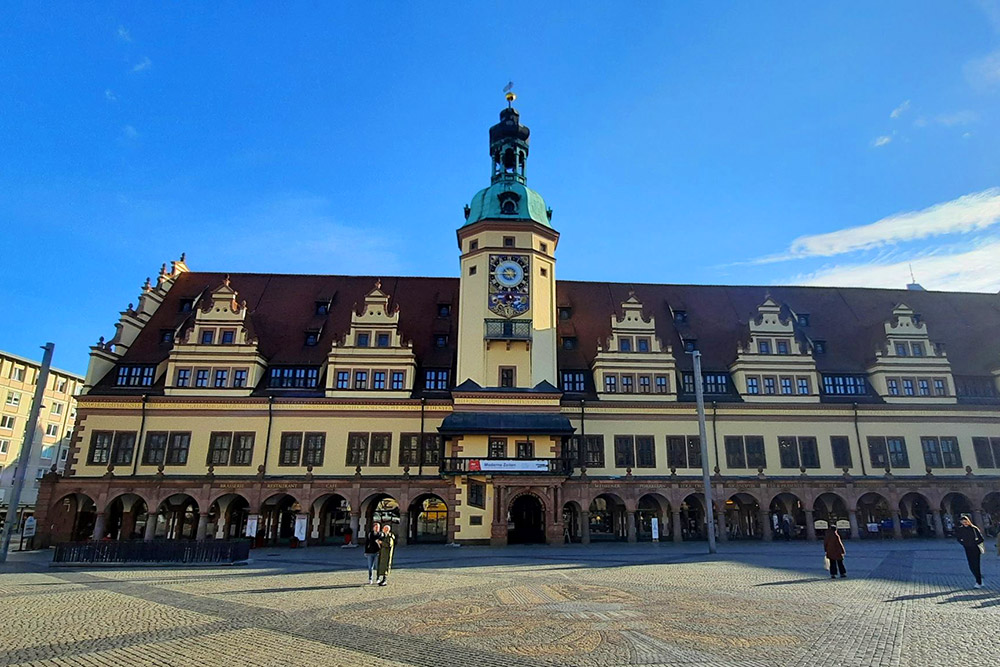 Located in the heart of the historic center, the old town hall will surprise you with its beauty and splendour. It is a Renaissance construction erected in the year 1556. A curious fact. The architect Hieronimus Lotter had to hurry with the construction since he could only carry it out between the spring and autumn fairs. The town hall was built for only nine months.

Which it was the result? Quite fatal, as the building subsequently required various repairs and renovations. To this day, there is a saying in German – this is the Lotter economy (Lotterwirtschaft) – an expression that means lack of quality, efficiency and solidity.

Currently, in the interiors is the Historical Museum of the city. The ticket is 6 euros. It is recommended for true lovers of history.

The exhibition shows the last two centuries of the city’s past:

Other information, which surprised us. Did you know that Leipzig was liberated by the American armies? However, it later remained in the Soviet-administered zone. The last part tells the most recent history of the GDR, the peaceful protests of 1989 and the German reunification.

We were more excited to see the historic interiors – including the famous Great Hall adorned with portraits of Saxony’s electors and municipal councillors. Unfortunately, it remains closed until mid-2022. 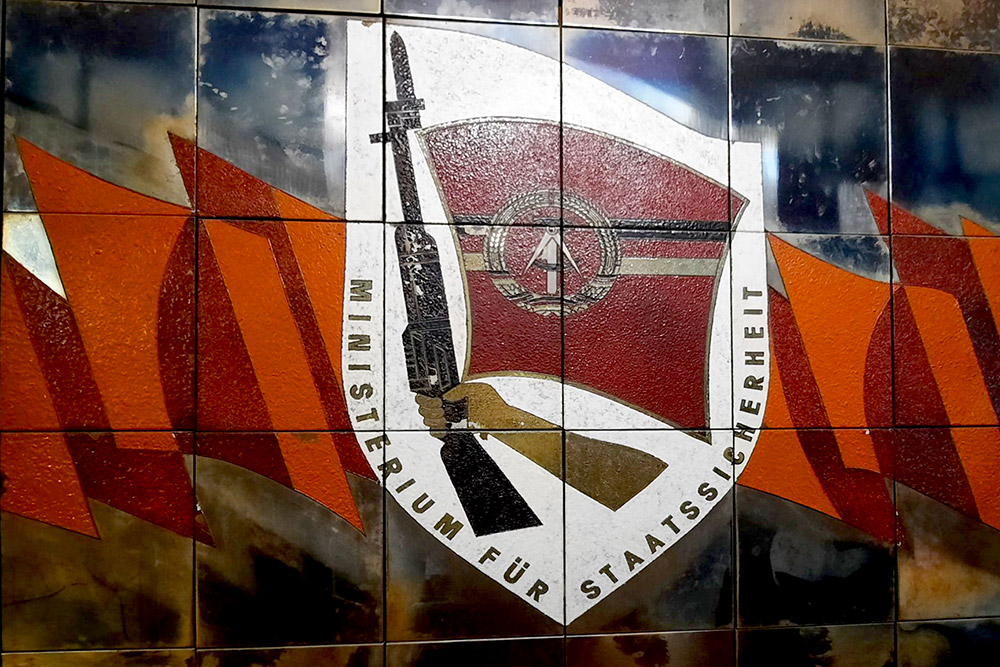 An amazing place that will leave you speechless. The museum is located in the former provincial headquarters of the Ministry for State Security. Admission is free but it is worth paying 5 euros for the audio guides available in Spanish. It will make it much easier for you to deepen your visit.

The interiors are extremely impressive as they take you back in time a few decades ago. We are talking about the time when the GDR and the most feared and hated STASI still existed – the shield and sword of the communist regime. You will be able to see a typical office of ministry officials, their mass surveillance systems of East German citizens. Seeing all the original espionage targets, cameras, recording systems, makes my hair stand on end. Go figure! In the Leipzig region alone, the ministry stored more than 300,000 personal files on real or imaginary enemies of popular power!

They show you uniforms, types of weapons to the crushing machines used by the last STASI officials. After the fall of the Berlin wall and before the possible reunification, the agents wanted to get rid of all the documents and evidence of the injustices committed.

An essential visit to understand the mechanisms of a totalitarian state. If you are interested in the subject of the GDR, we also recommend our list of the best films about Communist Germany. 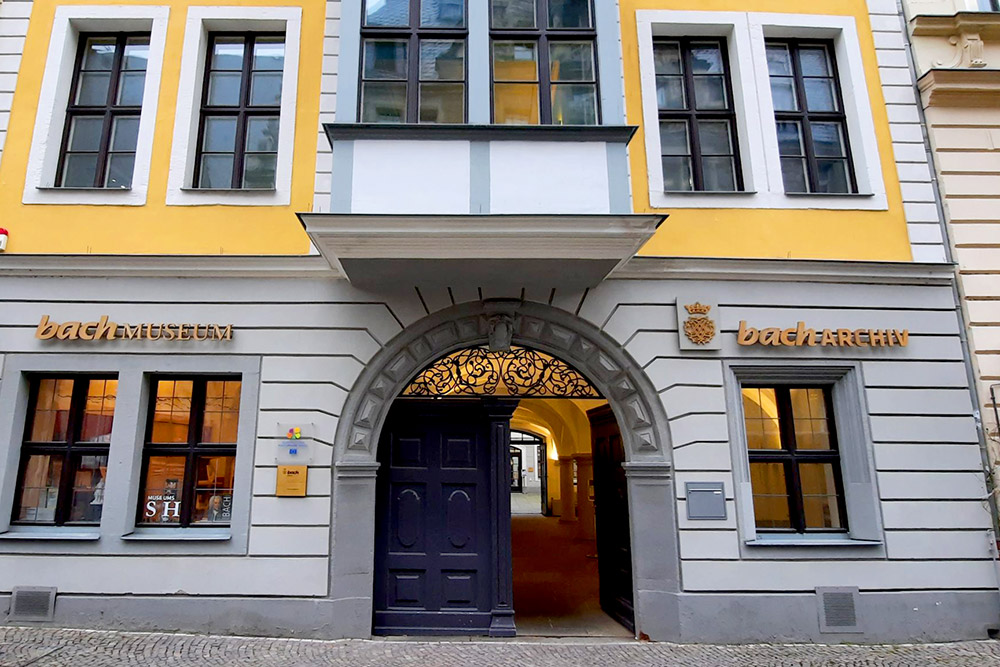 One does not have to be a great lover of classical music to fully enjoy this museum. It is located in front of the majestic church of Santo Tomás. It is there where Juan Sebastián Bach in the years 1723 – 1750 exercised the function of musical director. The exhibition allows you to delve into the life and work of the great master. Did you know that Bach had two wives and 20 children? Only half of him survived to his adult life. All four sons went on to become composers and performers as well.

Admission costs 10 euros, but includes the audio guides available in Spanish. Many personal details are shown, musical instruments that Bach liked to design and refine. Several anecdotes are told. The one we liked the most was about the famous composer’s visit to the King of Prussia’s court in Potsdam. It is there that he composed for Old Fritz the “Musical Offering 1079” – a special theme that the talented monarch could play on his flute. Then you can listen to it. A delicious experience…

We tell you about the life and customs of Frederick the Great during our free tour in Spanish through the historic center of Potsdam. 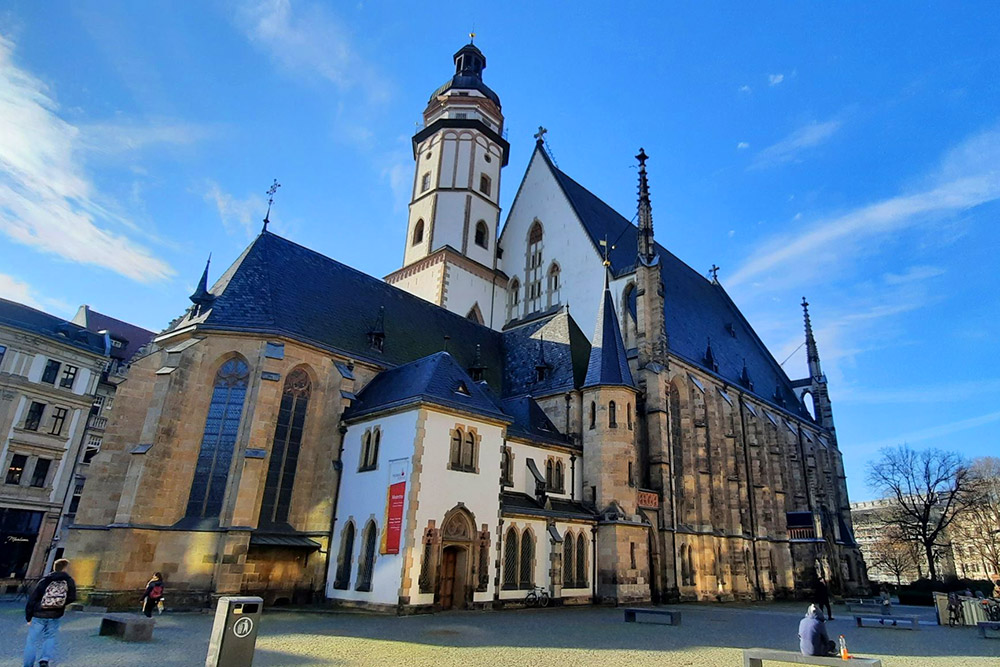 The Church of Santo Tomás It is a Gothic temple with a ribbed vault and striking pinnacles. It stands out with its majestic tower. In the square in front, it is worth admiring the statue of Juan Sebastian Bach. Where to pay attention? You can look at the composer’s empty pocket. Perhaps it was an allusion by the sculptor, that Bach as the musical director did not receive a well-paid salary?

The church has a special atmosphere. It is the Mecca for all music fans of the great composer of cantatas and passions. There they “pilgrim” to his modest tomb. Bach’s remains lie in the church only since 1950! According to urban legend you will always find fresh flowers on top of his grave. The baptismal font where some children of the great master and little Richard Wagner, another musical icon of Leipzig, were baptized. 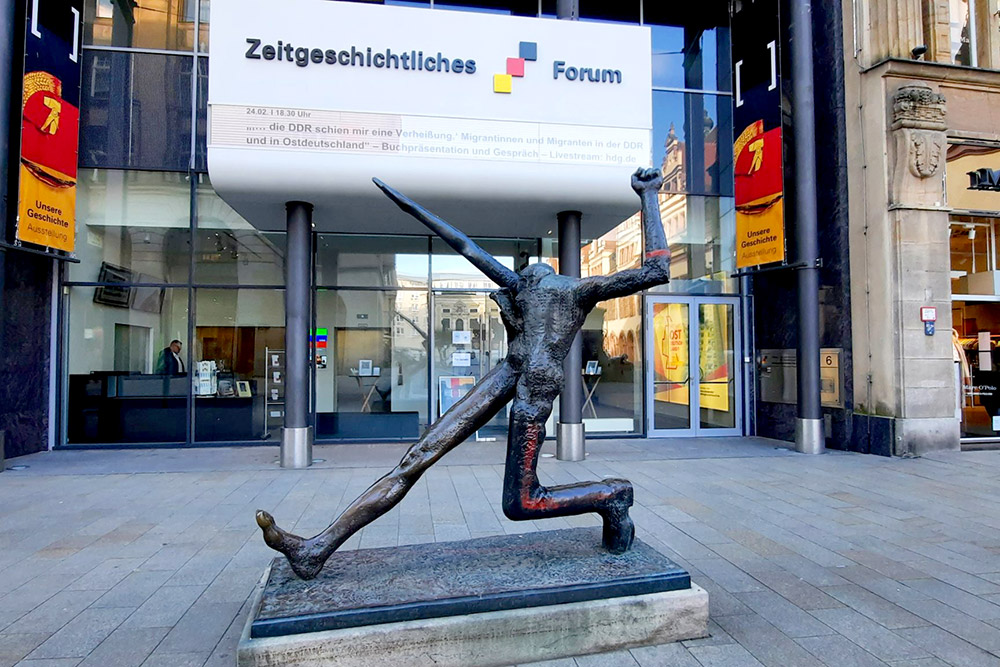 A very modern space that makes it easy to learn about the history of East Germany. Entrance is free. We started at the end of the Second World War and the Potsdam conference that defined the occupation zones of Germany. Throughout the exhibition with original requirements, even war cannons or Trabant brand communist cars. You will know the creation and development of the RDA.

A fascinating lesson, party rallies, ideology, compass shields and hammer, up to the crucial moment – the protests of October 9, 1989 in Leipzig. This event would mark the before and after in German history. What we liked the most was the current time, linked to Brexit and other current issues for Germany and the European continent in general. We give it a 10.

6. The monument commemorating the Battle of the Nations 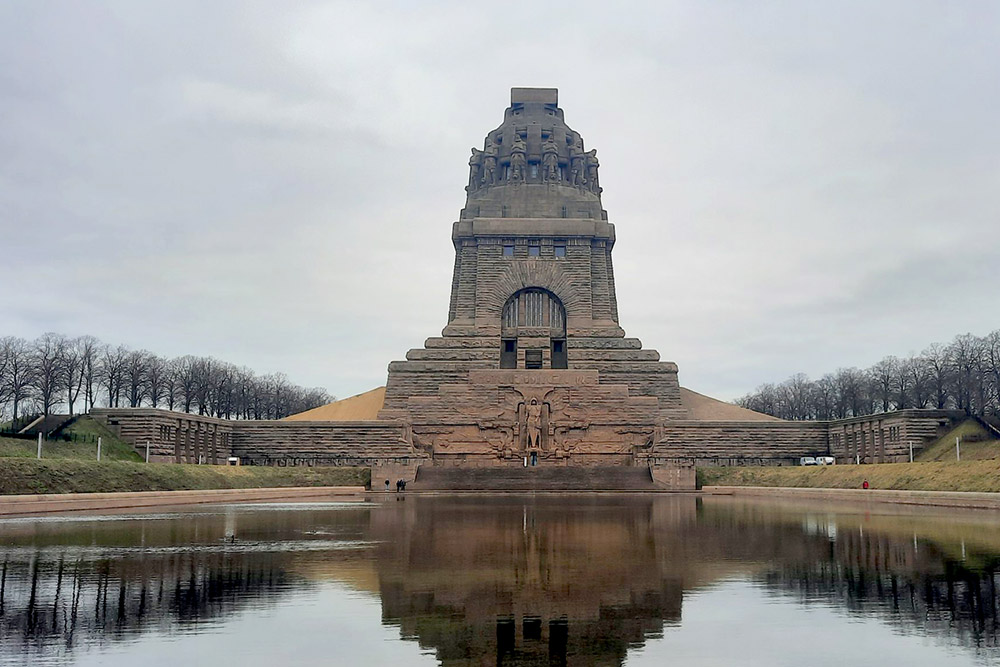 This monument is definitely a must see tourist attraction while in Leipzig. Located a bit on the outskirts, it can be easily reached by public transport (tram number 20 from Augustusplatz to Meusdorf, a single ticket costs 3 euros one way). It is an impressive construction of 91 meters high, made of 26,500 cubes of porphyry granite. It leaves you breathless!

The monument was erected in October 1913 to commemorate the centenary of the Battle of Leipzig. This was the largest military confrontation of the 19th century. Before the gates of the city the French troops and their allies led by Napoleon Bonaparte fought against the coalition of Russians, Prussians, Austrians and Swedes. Imagine, more than half a million soldiers! Among them life lost almost every fifth.

The monument is decorated with striking symbolic motifs – sleeping medieval knights. The entrance costs 10 euros. To the side is a small display of pictures, uniforms, and models of the battle. It is worth its price more than anything for the spectacular views of Leipzig and the surrounding area from the observation deck. But beware! There are more than 500 steps! 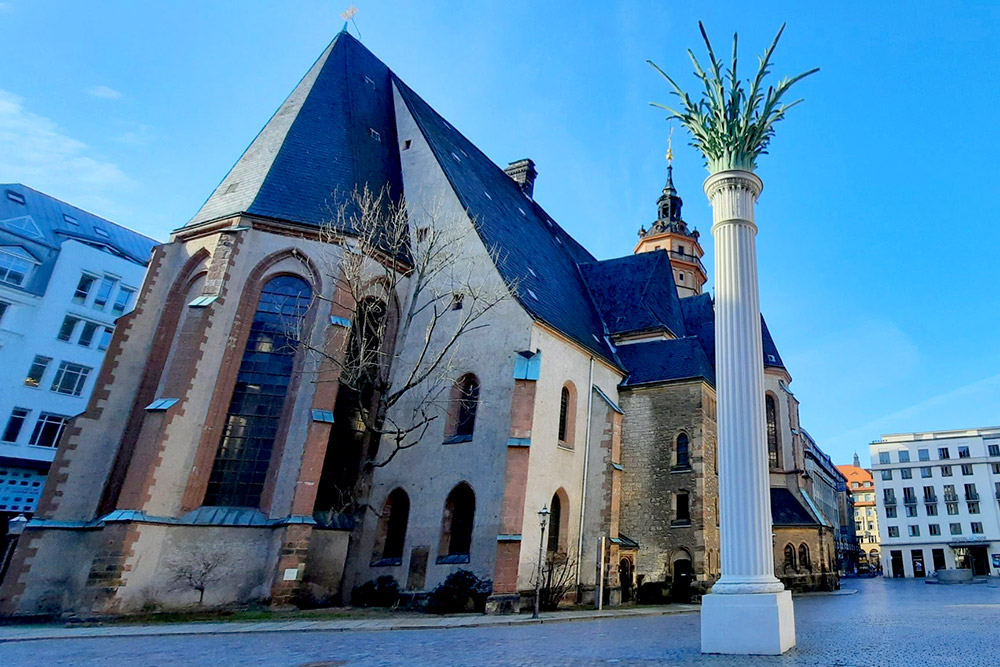 Returning to the center we recommend you visit the second important parish church in the center of Leipzig. The church of San Nicolás is the oldest in the city. At the end of the 18th century, an innovative and extravagant renovation was conducted in the classical style. Do you wonder why there is a tall column in the shape of a palm tree in front of the square? There are many reasons.

If you would like to know more details about these events, we will tell you about them during our free tour in Spanish through the historic center of Leipzig. 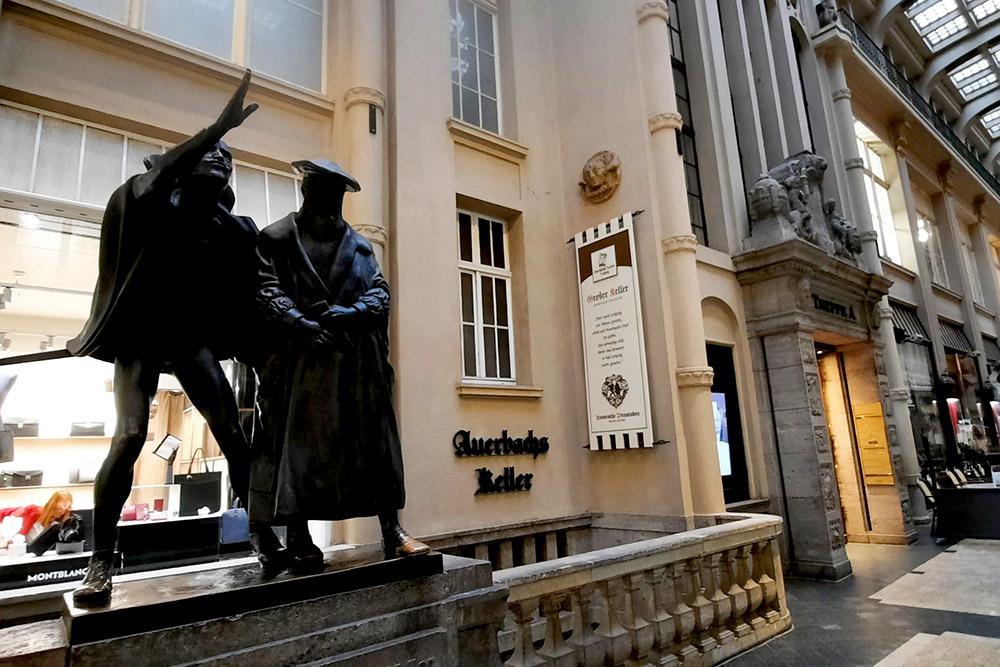 Leipzig is famous for its mercantile heritage. The fairs organized from 1268 flourished thanks to the privileges in the following centuries. A sample of its wealth are the elegant shops and the numerous commercial passages.

The most important is the Mädler Passage. The building is relatively new (1912-1914), but it houses a very expensive place for all Germans. It is there that the most famous tavern in the whole country is located – Auerbachs Keller.

In this traditional wine cellar the young student Goethe used to sit and enjoy a drink. Hearing local legends he was inspired to create his famous literary work “Faust”. It is worth trying to reserve a table, as they often offer live music as well. Prices are not for every pocket. However, you can only walk to admire the statues at the entrance where Doctor Faust is personified accompanied by Mephisto.

This ends our list of the 8 must-see spots in Leipzig. However, the city has other outstanding monuments. Some, such as Augustus Square, the University of Leipzig, the New Town Hall, we show you during our Free tour in English through the old town of Leipzig.

Other points of interest are located in the most remote parts and can be visited by public transport. So that you continue enjoying your stay in Leipzig, below I have written some tips that will make this trip one of the best.

In addition, it is a young student city with a vibrant atmosphere. It has good local cuisine, with typical wines and excellent craft beers. Tell us in the comments, how was your visit to this beautiful city? See you in Leipzig!