Top 5 free places you have to see in Frankfurt

Top 5 free places you have to see in Frankfurt

The “Bankfurt” is not as expensive as it seems.

Do you want to visit the financial capital of Europe? Frankfurt am Main or Frankfurt am Main, sometimes also called Mainhattan can seem like a super expensive city. However, the tall skyscrapers with headquarters of banks and financial institutions should not fool you. The city has some incredible monuments that you can visit in a completely free way.

In this post we present you the 5 free tourist places in Frankfurt. Are you ready to take advantage of the generosity of the people of Mainhattan? let’s start 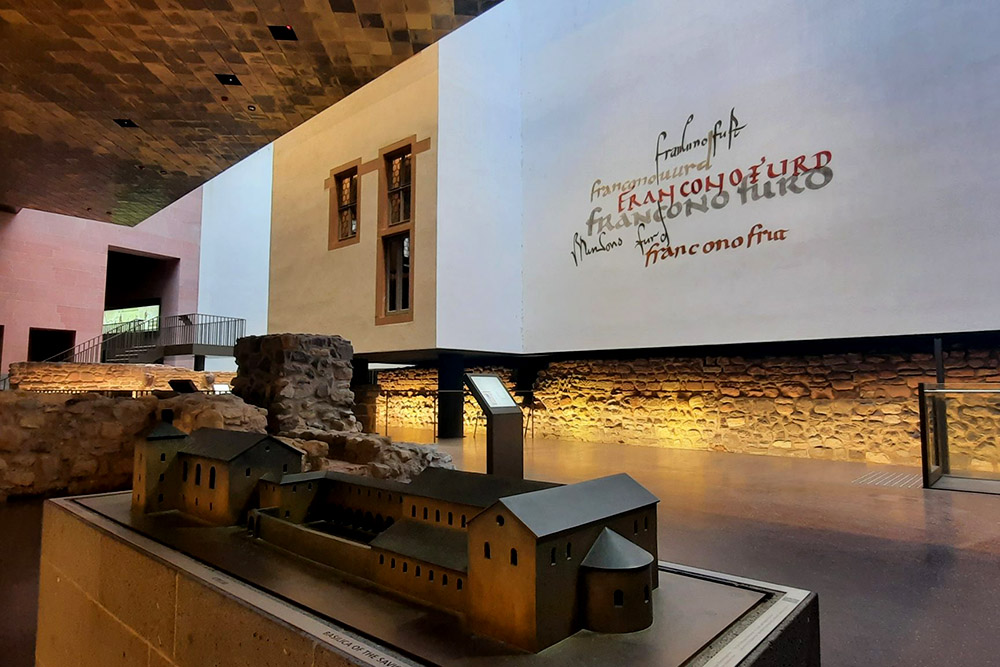 Our list of 5 free attractions in Frankfurt opens the Archaeological Museum branch. On a hill called Domhügel in German, next to the cathedral, you will find a very interesting place. It is a small archaeological park where you will see the remains of buildings built at the time of the Roman Empire.

How was the history of Frankfurt born?

The Romans were unable to conquer the territories of the Germanic tribes. To defend the empire, the border called limes was created. This followed the course of the Rhine River to the Alps.

The current city area had several strategic advantages. From the hill you could control the ford by the river Main. It was the reason why the Romans built a small walled garrison. We are talking about the year 75 after Christ, when the history of the city begins.

Going down some stairs, you are going to undertake the fascinating journey to the past. Subways have a unique atmosphere! The exhibition combines the original wall and foundation fragments with multimedia displays. You will know not only how the Roman soldiers lived, but also their system of hot and cold water baths. Even the drainage system!

Will you think that’s all? That is not the case! Frankfurt also played an important role in the state of the Merovingians and Carolingians. In fact, the name of the city is attributed to Charlemagne.

Origin of the city name

The legend tells us the German medieval chronicler Tietmar. According to him, the Franks, defeated by the Saxon troops, at the time of retreating, saw some deer safely crossing the ford of the River Main. In this way, Charlemagne and his soldiers knew where to escape, saving their lives. Hence the name Frankfurt – the ford of the Franks.

It’s just a legend, but did you happen to know the name of the neighborhood located at the other end of the river bank? Sachsenhausen – the house of the Saxons. What a curious coincidence right?

Returning to the topic, it is worth taking your time to contemplate not only what the Pfalz – the temporary residence of Charlemagne looked like, but also the archaeological finds, among them the jewelry of the Merovingian aristocrats.

In short, the visit is a highly recommended experience – the place is open from Tuesday to Sunday from 13:00 – 17:30. 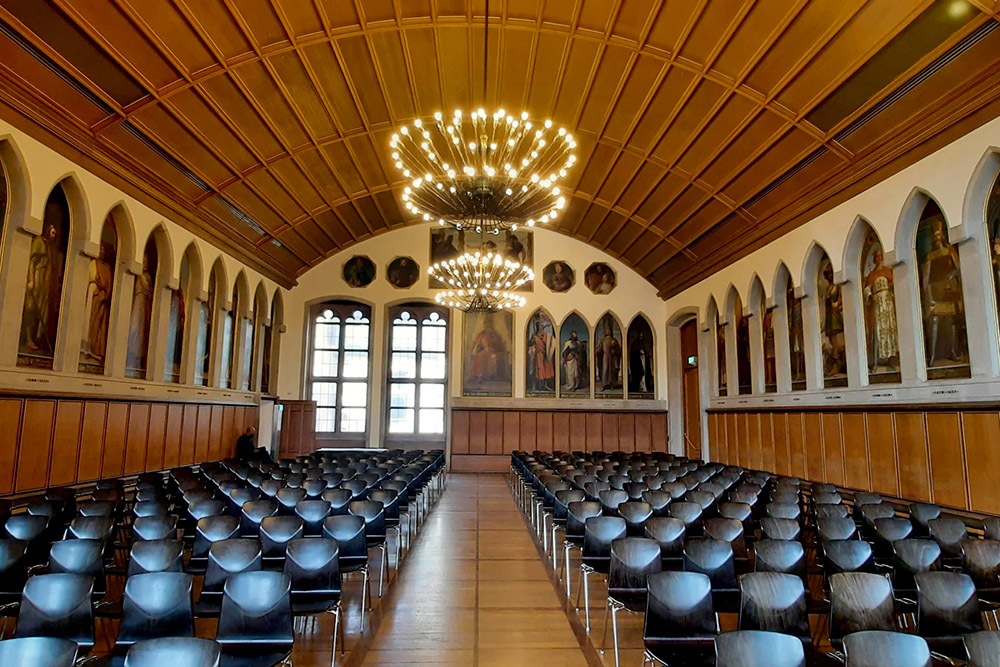 Number two on our list of top 5 free tourist attractions in Frankfurt is the iconic hall called the Kaisersaal. It is located in the old town hall – Römer – in the heart of the old town.

The building, since 1405, was used as the seat of the municipal authorities. How was Frankfurt at that time? It was not just any city, but a Free Imperial City under the direct care of the emperors. Moreover, it is there that the imperial elections were held from 885. From the year 1562 the coronations were celebrated.

One can be confused, because the entrance to the famous Hall is not located on the main square Römerplatz. You have to go through the adjacent alley (Limpurgergasse) almost behind the town hall. Passing through a beautiful courtyard, one climbs the stairs entering the representative building. The interiors are a true marvel!

Initially, the municipal councilors met in the room. In 1612, a famous banquet was held there for the first time after the coronation of Emperor Matthias. Since then the parties in the room became an important tradition. The last reception took place in 1792 after the coronation of Emperor Francis II. It was the end of a certain era. A few years later, Napoleon Bonaparte’s French troops invaded German-speaking territories, thus ending the first German Reich.

The Hall today plays a very symbolic role in German society. Once you enter you will feel the long history of the country. Along the walls, you will see the 52 oil paintings depicting the kings and emperors. Started from Charlemagne and Frederick I Barbarossa to the last Francis II. What to pay attention to? As always in the renowned Carlos V, the King of Spain, under whose land the sun never set.

The Imperial Room is open from Monday to Sunday between 10 a.m. and 5 p.m. Admission is free. Subject to changes for events and receptions. Recommending if you want to live first-hand the history of the German Reich. 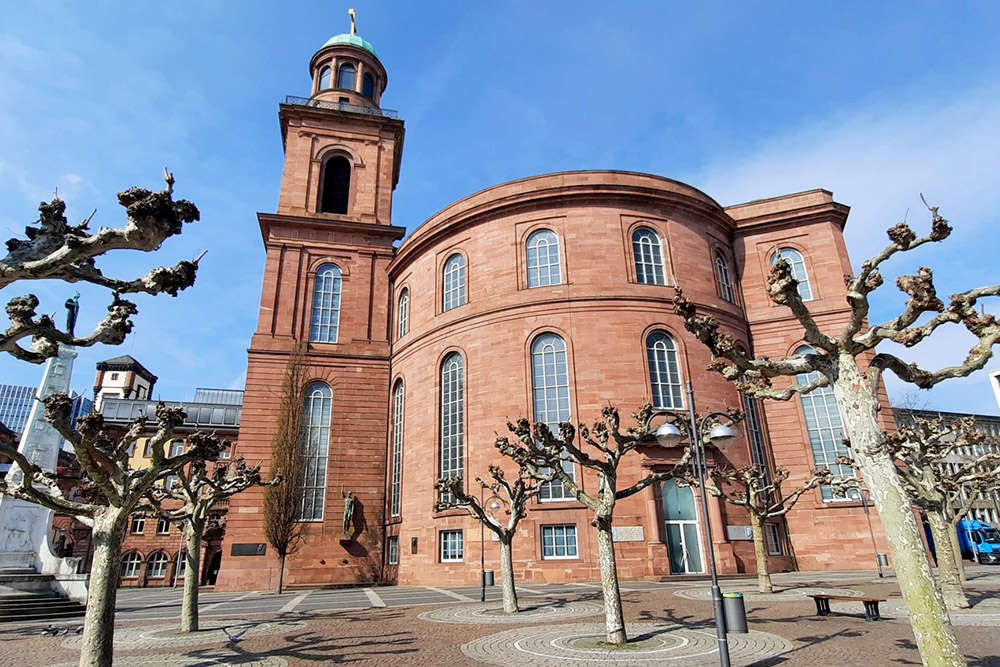 Number three on our list of free places in Frankfurt is St. Paul’s Church. Don’t be surprised if you see a lot of school groups entering the building. It is a very important monument for the creation of modern democratic Germany. Surely you will ask what happened in this church? Why is it so important to the German people? There goes the answer:

Previously, mentioned the French invasion put an end to the old Reich. Napoleon Bonaparte’s troops brought a new order to the Germanic-speaking territories. To remember – at this time there was no Germany as such. We are talking about countless principalities, dukedoms, counties and bishoprics, linked by the same language and the common history of the Holy Roman Empire.

The wars against foreign occupation and the defeat of Napoleon aroused a new “Pan-German” nationalist feeling and a unifying desire. The great opportunity presented itself during the popular revolution of 1848. Germans from different countries called elections and chose their delegates for the national assembly. The purpose was to form a united German state.

Where were they found? Obviously in Frankfurt, for its tradition of elections and coronations of the Kaisers. Due to the lack of sufficient space in the aforementioned Imperial Hall, the Church of San Pedro was a perfect solution.

The Cradle of Parliamentary Democracy

On the ground floor you can follow all this history on various banners with images and descriptions in English. An essential visit, to better understand the history of German parliamentarism. What was the end of this story? The delegates wanted to create a constitutional monarchy by offering the throne to the Prussian King Frederick William IV. Do you know what he answered?

He did not accept the offer being of popular origin. Supposedly, he said that the crown was “pork”, with “a diadem of dung and clay” that gave off the “rotten smell” of revolution. Germany had to wait many years to form a true democracy.

On the first floor you will find a large room, adorned with the flags of all current federal states of the republic. Did you know that, after the second world war, moving the German capital to Frankfurt was considered? If so, the church would have been the seat of the Bundestag. This proposal lost only a couple of votes in the parliament in favor of Bonn. (If you are interested in this topic, we will tell you about it during our free tour in Spanish through the historic center of Bonn).

The building is open from 10 a.m. to 5 p.m. Monday through Saturday. Sunday remains closed. 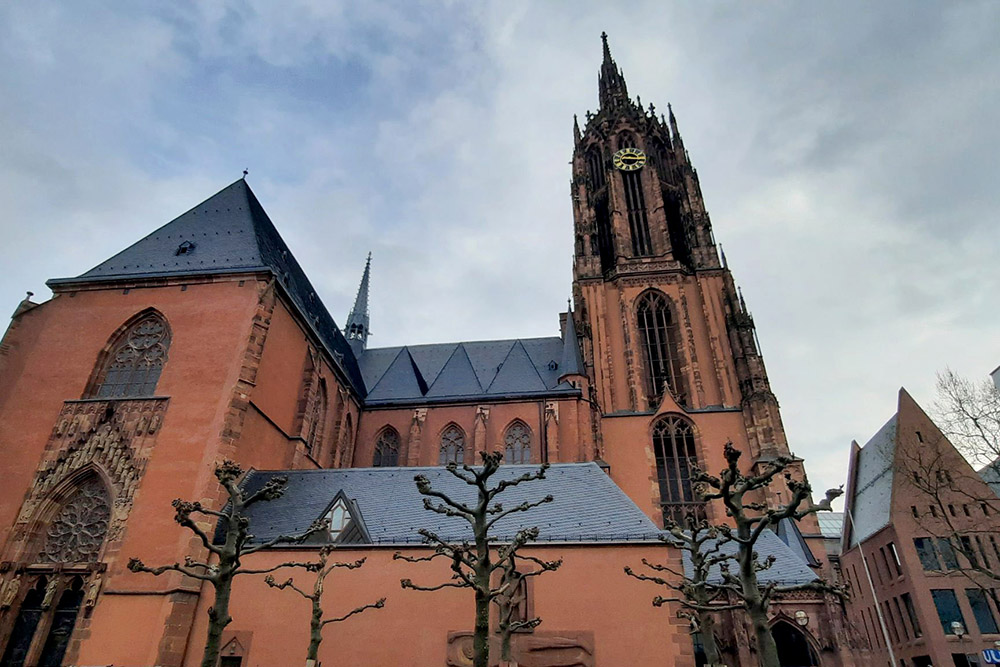 Continuing our list of the best free places in Frankfurt, we will find the majestic Imperial Cathedral. The church is an unquestionable symbol of the city. Built of a characteristic red sandstone from the Main area (Meinsandstein), it stands out with its 95-meter-high tower. Before entering take a careful look at its top. That you remember something? Of course! It is not a coincidence. It has the shape of the imperial crown, since from the year 1562 the emperors were consecrated in the interiors.

At the entrance it is worth taking a look at the photos taken after the British air raids in March 1944. What struck us most was the main nave, with its spectacular ribbed vaults. It is impossible to mention all important monuments, since the church is more than 1200 years old. The atmosphere of the remote past is felt in its quiet interiors. We particularly enjoy:

The cathedral is open every day from 9:00 a.m. to 8:00 p.m. Sightseeing is not allowed during masses. 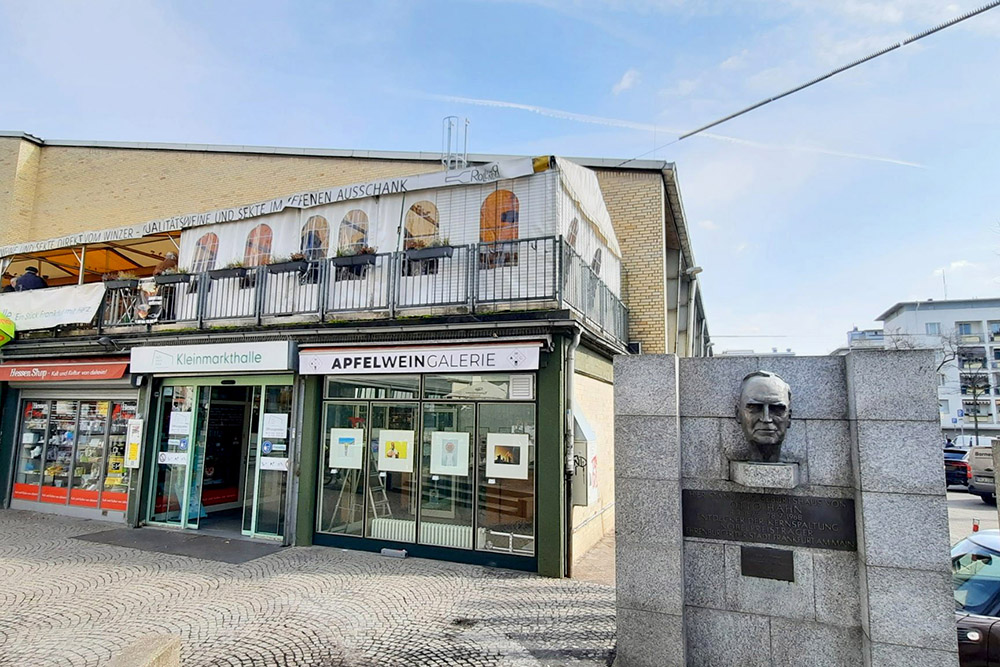 Our list of the top 5 free places in Frankfurt wraps up the alluring indoor market. The tradition of buying and selling has a very long tradition in the city of Meno. In medieval times, the city played a key role in European trade thanks to its famous fairs. Can you imagine the headache of numerous merchants trying to do business using various coins of various sizes and precious metal content? What happened then? The bourgeois invented the sophisticated banking system to facilitate monetary exchange, thus giving in the year 1581 the beginning of the Frankfurt Stock Exchange.

The Market building is not that old, since it was built in 1954. However, inside you will find more than 60 stalls, from the most typical German food to the most sophisticated flavours from different parts of the globe. It is one of these places, where you can feel the pulse of the city. For all tastes and palates.

There is a very vast section of local butchers. Obviously, you can’t miss the regional sausages – the Frankfurters. Another local speciality is the famous Grüne Soße – a thick green sauce based on sour cream with parsley, alzan and watercress. Very typical of the city.

We also recommend visiting the first floor, where you can enjoy the wide view of all the stalls. This level has a much more gastronomic character. There you will find restaurants and bistros. The establishment that caught our attention the most was the Weinterrasse, a wine cellar located on the terrace. It has a nice visit to the square with the Church of Our Lady of the Capuchins and its convent. It is there that you can taste the typical wines from the local vineyards situated in the rolling Rhine and Hesse area. A delight!

This ends our list of the top 5 free places in Frankfurt. However, the city has other outstanding monuments. We will show you some, like the Goethe House, the Stock Exchange or the Steel Bridge, during our free tour of the historic centre of Frankfurt. In addition, it is a commercial city, with a lot of money and business. It has a vibrant, chaotic environment full of contrasts. Tell us in the comments how was your visit to this beautiful metropolis of Hesse? See you in Frankfurt!